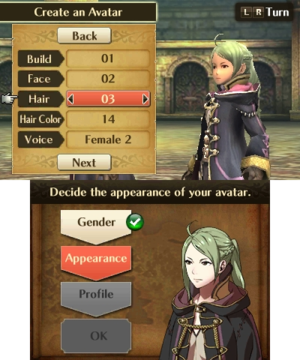 The avatar (Japanese: マイユニット My Unit) system is customizable character system introduced in Fire Emblem: New Mystery of the Emblem. Avatars were introduced to international markets with Fire Emblem Awakening, as New Mystery was not localized outside of Japan.

An avatar is a character created by the player, with certain customizable attributes that vary by game. Generally, the customization options allow different appearances, class access and some customization of growth rates. In every game in which an avatar is present, their defeat will result in a Game Over. This page is primarily for information on avatar mechanics, their customization and class, for detailed summaries of their plot roles see the main pages linked below.

The most recent game to specifically use the "avatar" terminology is Fates. While recent games continue to use player stand-ins, they are stripped of most customization options outside of choosing name and gender.

While not widely considered an avatar unit in itself, Fire Emblem's tactician character is the precursor to this mechanic. Known by the default name Mark (Japanese: マーク Mark). Distinctly, Mark is not a playable character, serving only a minor supporting story role. Creating a tactician in Fire Emblem is optional if the player skips Lyn's tale. For further details on this early incarnation of the system see the main page link above. 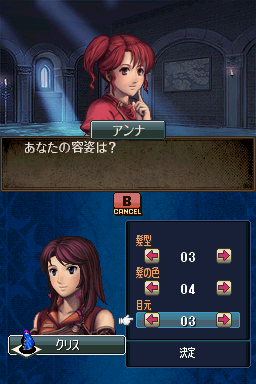 Anna guides the player through the avatar creation process.

The first in the series, New Mystery's incarnation of the avatar is known by the default name Kris (Japanese: クリス Chris). Kris's backstory can be chosen by the player somewhat, regardless of that, Kris's goal is always to join the Altean knights and serve Marth.

Unlike other avatar characters, Kris does not have a personal class, with the player instead being given the option to choose Kris's starting class from a list of standard classes. Kris may also be reclassed after character creation through the standard reclass system. A male Kris also benefits from the expanded reclass options for male characters unlocked after completing the game on hard mode or higher, although all of these classes are potentially available normally depending upon his starting class.

Unlike every other Avatar, Kris's outfit changes depending on their starting class. However, this outfit will remain fixed once a starting class is selected, and will not change if Kris is reclassed later.

When starting a new save file, Anna will guide the player through the creation process as followed: 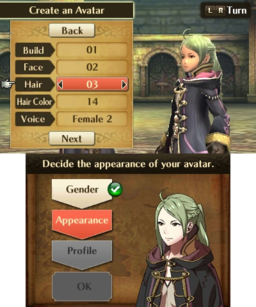 Awakening's incarnation of the avatar, known by the default name Robin (Japanese: ルフレ Reflet). Robin seems to be particularly inspired by Fire Emblem's tactician character, being a tactician in both character role and literal class.

In all cases, Robin will begin the game as a tactician, and can later be reclassed into any sex-appropriate class at will using Second Seals.

When starting a new save file, the player is prompted to create the save's avatar. The process comes in three stages: 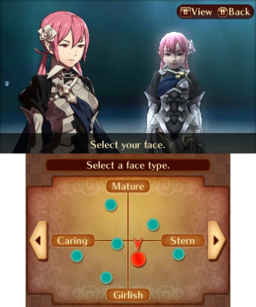 Fates's incarnation of the avatar, known by the default name Corrin (Japanese: カムイ Kamui). Corrin is a notable departure from previous avatars, as they are not a tactician or other aide to the main character; instead, they themselves are the main character. Corrin is also the child of a dragon, making them the first avatar that is also not fully human.

In all cases, Corrin will begin the game as a Nohr Prince or Nohr Princess, depending on their gender. A secondary class is also chosen, which Corrin may reclass to with a Heart Seal later on in the game. Secondary class choices are: Cavalier, Knight, Fighter, Mercenary, Outlaw, Samurai, Oni Savage, Spear Fighter, Diviner, Sky Knight, Archer, Wyvern Rider, Ninja, Dark Mage, Troubadour, or Apothecary. Due to the majority of classes no longer being gender-locked in Fates, both male and female Corrin have nearly identical secondary class selection, with the only exceptions being the Monk and Shrine Maiden classes.

As previously, when starting a new save file, the player is prompted to create the save's Avatar. Interestingly, the options are pretty much the same as Awakening but the organization of the user interface was redone, using a somewhat strange graph system, where features are plotted based on attributes, such as long hair being at one end and short at another.
Customization features are:

Fire Emblem Heroes' avatar, known by the default name Kiran (Japanese: エクラ Eclat), is a direct representation of the player summoned from the real world (call the "World of Steel" in-game). Unlike other avatar units, the summoner is not a playable unit in the main story chapters; they are only playable in certain event modes such as Mjölnir's Strike and Heroes Journey. They wield the legendary Breidablik, which allows them to summon heroes from other worlds.

When the game first launched, the summoner had a set appearance, and their gender could only be chosen in languages where grammatical gender is needed such as German. Starting from version 5.2.0, the player can customize their summoner's appearance.

While not officially referred to as an avatar, Three Houses's player stand-in is known by the default name Byleth (Japanese: male: ベレト Beleth, female: べレス Beleth). Byleth is a mercenary who is recently hired as an instructor at the Officers Academy. Byleth has only a few options for customization: form (gender), dialogue options, name (which has an eight-character limit), and birthday. Unlike the previous Avatars, Byleth has fixed base stats and growths, a fixed physical appearance and fixed voice options, with Yūsuke Kobayashi and Zach Aguilar* voicing male Byleth and Shizuka Itō and Jeannie Tirado voicing female Byleth in the Japanese and English versions, respectively.

Three Hopes's player stand-in is known by the default name Shez (Japanese: シェズ Shez). Shez is a wandering mercenary who comes into contact with Edelgard, Dimitri, and Claude, then later joins up with one of their choosing before the war breaks out. Shez can only be customized by form (gender) and name (which has an eight-character limit). Similar to Byleth in Three Houses, Shez has fixed stats, a fixed physical appearance, and fixed voice options, with Tasuku Hatanaka and Damien Haas voicing male Shez and Miyu Tomita and Dawn M. Bennett voicing female Shez in the Japanese and English versions, respectively. Unlike Byleth, Shez is fully voiced but selectable dialogue options still exist.

Byleth themselves also appears within the game. Just like in Three Houses, their form and name can be chosen by the player. Should the player have Three Houses save data on their Nintendo Switch, the latest name used for Byleth will be the default suggestion when starting a Three Hopes save file unless that name was already given to Shez.