Victory or Death (Japanese: 背水の戦い Last-ditch battle) is the thirtieth chapter of Eliwood's tale and thirty-second of Hector's tale in Fire Emblem: The Blazing Blade.

Fargus delivers Eliwood and company to the Dread Isle. Fargus agrees to look after Nils while they are away; before they depart, Eliwood talks to Nils, asserting that he intends to fulfill Ninian's wish for peace and defeat of Nergal. After the group departs, Fargus gives Nils an Earth Seal to give to the lords, and Nils departs to follow them. Nergal senses the approach of the lords and commands Limstella to defeat them. As the lords approach the Dragon's Gate, Nils yells a warning for Eliwood to move; Eliwood dodges a thunderbolt from Limstella. Nils tells Eliwood that he will take over Ninian's duties, then demands Limstella reveal herself. Limstella complies with his demand, then reveals an army of morphs and warps to the entrance of the Dragon's Gate. 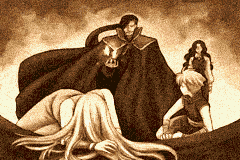 The lords eventually manage to defeat Limstella and the morphs, and arrive at the Dragon's Gate. Eliwood asks Nils how he and Ninian arrived in Elibe. Nils describes the dragons' travels through the Dragon's Gate to a new home. However, Ninian and Nils one day heard what seemed like a friend's voice from the gate, and they chose to pass through it alone. Once on the other side, Nergal stole some of their quintessence and their dragonstones; Ninian and Nils fled Nergal, and had disguised themselves as travelling performers when they met Lyn. After parting with Lyn, they were captured by the Black Fang and taken back to the Dread Isle, where they met Elbert. Elbert eased their fears by telling stories of his family and his homeland; Ninian and Nils felt that Elbert's son would one day save them. The lords affirm their resolve to protect Elibe from Nergal, and proceed towards the Dragon's Gate.

The secret shop is located in the top-right of the map, in the single plains tile between the forest and thicket tiles.

Stats with two figures separated by a ~ are presented as a range, representing stats that vary due to random growths. The figures to the left and right of the ~ are the stat's minimum and maximum possible values respectively.
Main article: Limstella

In Normal Mode, Limstella uses a custom variant of the Sage class with increased Defense and Resistance stat caps; in Hard Mode, they use the standard female one.