The Fire Emblem (Japanese: ファイアーエムブレム Fire Emblem), also known as the Binding Shield (Japanese: 封印の盾 Shield of Seals), is a key item in the plots of Fire Emblem: Shadow Dragon & the Blade of Light, Fire Emblem: Mystery of the Emblem Book 2, their respective remakes, and Fire Emblem Awakening. It was forged by the divine dragon ruler Naga to protect humanity from the earth dragons, and is later adopted by the kingdoms Archanea and Ylisse as a relic of the realm used to oppose the antagonistic dragons Medeus and Grima respectively. It is the first incarnation of the titular item of the Fire Emblem series, and only one of two to appear as a usable item in a character's inventory, the other being Fates' Yato. 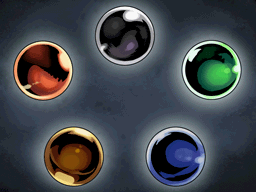 The Binding Shield was originally forged in the year -740, Archanea calendar, at the conclusion of Naga's war with the earth dragons. After placing a magical seal upon the defeated earth dragons beneath the Dragon's Altar, she created the Binding Shield and its five orbs to fuel and maintain the seal indefinitely and prevent the earth dragons from escaping.[1] She enshrined it and Falchion within the Fane of Raman, but around 730 years later, the Shield was stolen from the Fane by Adrah, then a mere thief. Adrah broke the five spheres from its surface and sold them to raise funds for his campaign to found his own kingdom, Archanea. He rechristened the shield as the "Fire Emblem", and adopted it as a treasure of House Archanea; unbeknownst to Adrah, his vandalism of the shield weakened the earth dragon seal.

In the subsequent centuries, the Emblem accrued a mythical role in the society of Archanea: it is bestowed by the nation's royalty upon a chosen hero who acts as the representative leader of Archanea's efforts to save the world from a dark force.[2] Two known heroes have borne the prestige of wielding it: Duke Caldas during the War of Liberation, having received it from Princess Artemis, and the Hero-King Marth of Altea during both the War of Shadows and the War of Heroes, having received it from Princess Nyna; both wielded it in opposition to the Shadow Dragon Medeus. During the War of Heroes, Marth recovered all five spheres and restored them to the Emblem, reforming the Binding Shield and re-establishing the seal over the Dragon's Table following his defeat of Medeus. In the war's conclusion the entirety of Archanea was united under Marth's rule, and both the Binding Shield and Falchion were adopted as companion treasures of the realm.

Eventually, the Kingdom of Archanea became the smaller Halidom of Ylisse, still ruled by Marth's descendants, and the completed Binding Shield remained in their possession under the name "Fire Emblem". The Emblem was used by the first Exalt of Ylisse in the rite of Awakening, bestowing Naga's power upon him to combat the Fell Dragon Grima. Some time afterward, an unidentified event known as the Schism caused the Emblem to lose its gemstones again, with four of them being scattered across the various nations of the realm while one of them, Argent, remained affixed to the Emblem. Eventually, the Emblem was re-completed by Prince Chrom as he sought to prepare to oppose the revival of Grima by Validar of the Grimleal, during which time Validar briefly stole it to use for himself, and was used by Chrom to perform another Awakening for Naga.

The original purpose of the Binding Shield was to seal the earth dragons in the Dragon's Table, and so as long it remains intact, the seal upon the earth dragons remains intact; if even one sphere is removed from it, the seal is weakened. Additionally, its existence prevented manakete children such as Tiki from degenerating as all other dragons did, and the removal of the spheres inhibited this protection as well.[3] In its complete form, the Shield has a repelling effect against earth dragons escaped from imprisonment, banishing them. Additionally, in both of its forms the Emblem allows its bearer to open any treasure chest they desire.

In the era of Ylisse, the Fire Emblem is used primarily for the rite of Awakening, described by Emmeryn as saving the world at its hour of most desperate need. The Emblem is to be used in conjunction with a sacred site in which Naga's power is strongest—traditionally Mount Prism in Ylisse's east—in order to perform the Awakening, whereupon Naga would confer her power upon the worthy. Legends abound of its power among the nations of the era, one of which is attested by Gangrel to claim that the Emblem can be used to fulfill all of the wishes of an individual.[4]

In Shadow Dragon & the Blade of Light, while not an item in the traditional sense, Marth having the Fire Emblem is shown by an icon (

The Emblem's power is dependent on the five orbs which were embedded in it at the time of its forging. Each orb contains great power in and of itself, and the shield's powers depend on having all five mounted upon it. Finding the five orbs and restoring the Emblem to its full power was central to both Marth and Chrom's quests. 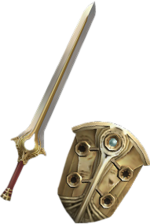 The Fire Emblem and Falchion in Monster Hunter: Frontier G.

In the Wii U version of Monster Hunter: Frontier G, the Fire Emblem is usable as a shield as part of the crossover promotion involving Chrom and Lucina armor sets. The Fire Emblem is paired with Falchion (Chrom's)/Parallel Falchion (Lucina's) as part of a combined shield and single-handed sword set.

The Binding Shield (known as "Fire Emblem" in the game) is one of Marths skills in the game. It causes Marth's sword to be enveloped in flames and shoot a wave of them at enemies, attributes usually linked to the Binding Blade from Elibe instead of the item from Archanea.