Chrom and "Marth" duelling in the Arena Ferox in Awakening.

The Arena Ferox (Japanese: フェリア闘技場 Felia Arena) is a gladiatorial combat arena situated in the central-west of Regna Ferox on the continent of Ylisse.

Every few years, the Arena Ferox houses the tournament in which the east and west khans of the nation compete to win the dominant position of "khan regnant" for the following few years, granting them total rule over both halves of Ferox and the powers to determine foreign policy and alliances.[1] In each tournament, the khans are represented by chosen teams of gladiators or other warriors typically recruited from outside Ferox, believed to be a necessity to minimize potential conflicts borne as a result of the tournament or deaths therein.[2]

During the last year of the reign of Exalt Emmeryn, the tournament was held between East-Khan Flavia and the regnant West-Khan Basilio. Seeking military support from Ferox in response to the Plegian threat, Prince Chrom of Ylisse and his Shepherds fought as Flavia's representatives. Basilio initially had his right-hand man Lon'qu as his representative, leading a group of anonymous warriors, but prior to the tournament Lon'qu was defeated by "Marth", who took his place as the leader of the west's champions.[3] Chrom won the tournament, elevating Flavia to the position of khan regnant and ensuring the alliance and support of Ferox in assisting Ylisse.

The Arena Ferox is a world map location in Fire Emblem Awakening, and is the subject of Chapter 4. Once this chapter has been cleared, skirmishes can appear here, featuring enemies ranging in strength from unpromoted levels 8 to 14. 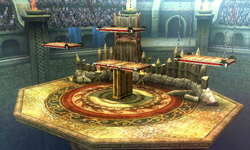 Arena Ferox is a stage in Super Smash Bros. for Nintendo 3DS, as a Nintendo 3DS exclusive unavailable in the Wii U version. Unlike its Awakening appearance, the arena consists of a large stone platform in the middle of a deep pit, better facilitating the gameplay of Super Smash Bros.. The stage periodically transforms between at least four known configurations which have different arrays of platforms above the main stage body:

In addition, like all stages in the game, there is also a Final Destination configuration with no platforms at all, disabling the stage's transformation. This variant is used in the "For Glory" online gameplay mode.

Arena Ferox was also the setting of "By Book, Blade and Crest of Flame", the animated trailer which confirmed Lucina and Robin as playable characters. The trailer depicts Lucina duelling with Captain Falcon in the Arena Ferox, Chrom having already been defeated and badly wounded by Falcon.