This article is about the continent itself. For the nation which formerly shared this name with the continent on which it was set, see Valm. 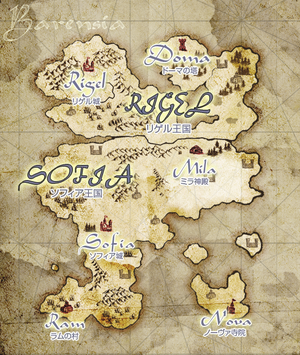 Valentia, prior to unification.

Valentia (prounounced /⁠vəˈlɛntiə⁠/[key][1]; Japanese: バレンシア Valentia), later renamed Valm (Japanese: ヴァルム Warm), is a continent situated to the west of Archanea/Ylisse, and is the main setting of Fire Emblem Gaiden, its remake Echoes: Shadows of Valentia, and parts of Awakening.

In the early history of Valentia, the continent was governed by two sibling gods: Mila, the Earth Mother, and Duma, the Dark God; however, the two experienced a schism over their incompatible philosophies, and so went their separate ways and founded their own nations, Zofia and Rigel, each governed as their god saw fit. The strong influence of the gods over the nations, with no counterbalancing philosophy, corrupted the people of both nations in different ways.[2] After centuries of this misrule, in the year 606 (Archanean calendar), Zofia was subjected to a coup d'etat by its General Desaix and Rigel launched an invasion as part of the plans of its emperor Rudolf to rid the world of the influence of both gods; in response, the heroes Alm and Celica led their respective armies to combat Rigel and find the missing Mila, ultimately ending in the defeat of Duma at Alm's hands and the disappearance of both gods from the world.

Alm and Celica, as the surviving royals of both nations, married and united Valentia into a single nation with Alm as its first Exalted King. Following Alm's death, his successor renamed both the kingdom and the continent to "Valm", in honor of Alm's legacy.[3] After an unknown amount of time, Valm experienced a schism and broke up into numerous smaller nations, and so it remained in this state until millennia after the kingdom's foundation, when the continent was reunited into a single Valmese Empire by Walhart the Conqueror.

Zofia is the nation which comprised the southern half of Valentia prior to its unification by Alm and Celica. It was founded by the Earth Mother Mila and her followers, and so adopted a strong pacifist and passive nature.

Rigel is the nation which comprised the northern half of Valentia, prior to its reunification by Alm and Celica. It was founded by the Fell God Duma following his schism with Mila, and so in strict adherence to his philosophy became a strict militant nation; however, in the end it was the actions of its emperor Rudolf which ensured an end to the gods' hold on Valentia and the continent's reunification.

The Kingdom of Valentia, later renamed Valm, has existed in two forms over the eons. The first incarnation was founded by Alm and Celica with the unification of Zofia and Rigel following the defeat of Rudolf and Duma, with Alm as its first Exalted King; following Alm's death, his successor renamed the kingdom and continent to "Valm", in honor of Alm's legacy.[3] At some point the kingdom collapsed and the continent split once again into multiple nations, with the Valmese Empire itself now comprising a miniscule and forgettable nation, but it was reformed back into a continent-spanning powerhouse millennia later by Walhart the Conqueror.

Rosanne was a minor nation of Valm present after the split of the first incarnation of the Valmese Empire, located in an unidentified part of the continent. It was subjugated by the second Valmese Empire under Walhart and absorbed into its holdings. Virion, an ally of the Shepherds, is a noble of its former House Virion.