Not to be confused with the ancient language of Tellius or the Ancient Texts of Fates. 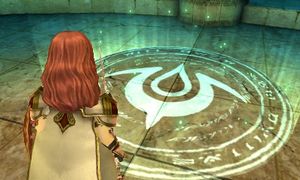 A warp with the Brand of Naga, circled by Ancient Letters.

Ancient Letters is a term to refer to a particular script appearing on Ylisse and Valentia. More specifically, it appears in Fire Emblem Awakening and Fire Emblem Echoes: Shadows of Valentia. This script is not currently known to have appeared on Archanea, only Valentia, during Marth's time.

The origins of the Ancient Letters are unclear. They are not acknowledged by characters during the events of the game. They may bear some connection to the dragon tribes, almost always being featured on dragon-connected weapons or magic.

A legend that can be used to decode most instances of Ancient Letters was provided in The Art of Fire Emblem Awakening, a Fire Emblem series art book featuring concept artwork and notes. Similar to the implementation of ancient language in Fire Emblem: Path of Radiance and Fire Emblem: Radiant Dawn and the Ancient Texts in Fire Emblem Fates it is a simple cipher based on the English alphabet. It lacks distinct uppercase and lowercase letters. 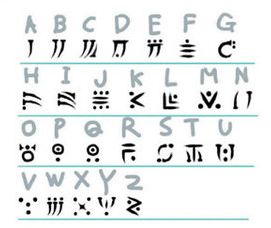 This is an English sentence backwards, when reversed it becomes the legible: 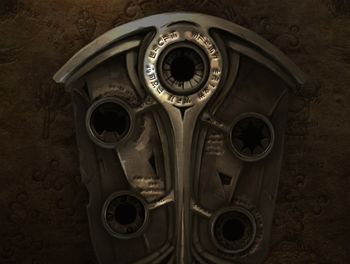 The inscriptions describe the respective orb that goes into each slot. 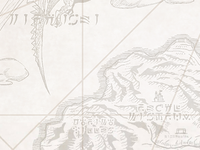 Artwork of the world map with visible lettering, including "Barensia" and "Rigel Castrum"; notably, "Doraco" is misspelled.

The entirety of Fire Emblem Echoes: Shadows of Valentia's world map is labeled in Ancient Letters at geographic points of interest. The letters spell out the name of the location using Latin words and Japanese names (e.g. Dolk Imperium or Sofia Castrum).

Some Latin phrases are misspelled; the labels corresponding to Dead Man's Mire and The Swamps of Duma, "Mors prlus" and "Doma prlus" respectively, us "prlus" instead of "palus", the Zofian desert is labeled "Sofia desart", the Deliverance Hideout is labeled "Cataconb", the Dragon's Maw is labeled "Doraco vallis" rather than "Draco vallis", Ram Woods is labeled "Ramsil" likely as opposed to "Ram silva" like other forests, and the Last Bastion is labeled "Bastellum" rather than "Castellum".

Some labels correspond to more general areas that don't have proper names; the region west of Zofia Castle, referred to as Northern Zofia, is labeled "Sofia Patet" (Zofia Plains), the Desert in eastern Zofia is labeled "Sofia desart" (Zofia Desert), and the valley corresponding to the Valley Approach is labeled "Mira vallis" (Mila Valley).

Unlike other instances of Ancient Letters, this set when deciphered becomes a Greek phrase.

When translated, it becomes:

Unlike previous uses of Ancient Letters these are slightly different from the standard set, though these could just be from artist error or a previously unknown contingency involving two of the same letter being side-by-side.

The phrase is typically interpreted as "anime project success" though it is unclear what this implies, if anything. 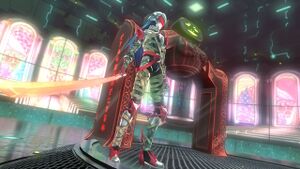 Ancient Letters on the side of Excellus's body

Excellus has ancient letters along the side of his body.

This phrase could be interpreted as "gate of wisdom", possibly referencing Excellus's arch-like shape in this game.

Additionally, Excellus has six rectangular objects that float around his body, each displaying an Ancient Letter.

If the letters are read left-to-right as they appear while Excellus is idle:

If the letters are read clockwise from the top during Excellus' attack "All a part of the act":

It is unknown what word or phrase, if any, these letters are meant to spell out.

The coins received from the Urahara Arena each display an Ancient Letter on their front, and several Ancient Letters along their rims. 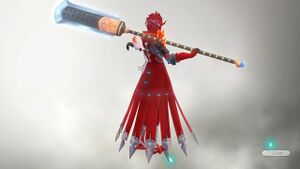 Ancient Letters on the blade of Touma's weapon Ruin

This phrase could be interpreted as "reaper dome slate", but the significance of this is unknown. 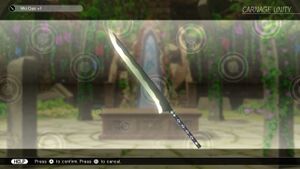 Ancient Letters on the blade of Yashiro's weapon Wo Dao

Yashiro's weapon Wo Dao features Ancient Letters on the blade.

"Magro" appears to be an Italian word meaning "thin" or "lean". Since the weapon's design strongly resembles a kitchen knife, this may refer to food, particularly meat. 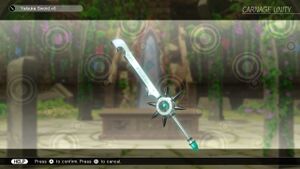 Ancient Letters on the blade of Yashiro's weapon Yatsuka Sword

This can be interpreted as "To live is to think", a quote from the Roman philosopher Marcus Tullius Cicero. 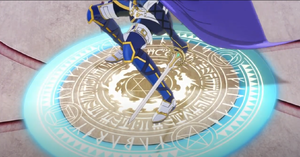 During the Opera of Light: Fire Emblem ritual, the Mirage Masters stand atop pillars that create create magic circles, which act as flying platforms. These platforms have Ancient Letters on them:

This is a reference to Tokyo Mirage Sessions's concept as a Shin Megami Tensei and Fire Emblem crossover. "Shin Megami Tensei" can be translated as "True Reincarnation of the Goddess", which could be considered synonymous with "the authentic descent of the goddes".

This interpretation is supported by the Medieval runes also on the circle, which translate to: