Falchion (Japanese: ファルシオン Falcion), often referred to in dialogue as the divine blade Falchion (Japanese: 神剣ファルシオン divine sword Falcion), is a regalia sword introduced in Fire Emblem: Shadow Dragon & the Blade of Light. It is widely known and revered as the "blade of light" (Japanese: 光の剣 sword of light) of Archanea, and it was forged by the Divine Dragon ruler Naga for mankind in order to better protect themselves against the threat of rogue dragons. It was adopted by the kingdom of Altea as one of their national treasures following its use against the Earth Dragon Medeus by the kingdom's founder, Anri, and has in the centuries since been famously used by several of Anri's descendants: Marth the Hero-King, the first exalt, and Chrom and Lucina of Ylisse.

1100 years prior to the War of Shadows, and 500 years prior to the formation of the Kingdom of Archanea, Falchion was forged by Naga from one of her own fangs along with the Binding Shield, in case mankind ever needed to defend itself from dragons, and was placed in the Fane of Raman with the Shield and Tiki, her newly-born daughter. In the year 498, during the fifth year of Medeus's reign of terror on the world, the hero Anri traveled to the Ice Dragon's Temple under the guidance of Gotoh to obtain the blade, and used it to kill Medeus and end the Dolhr empire.

After the fall of Dolhr, Anri founded the kingdom of Altea, and Falchion became one of its ancestral relics, passed down through the successive kings until, one hundred years later, it belonged to Cornelius, the fourth king. In the year 602, at the onset of the War of Shadows and Medeus's revival, Cornelius departed with the blade with the intent of fulfilling his destiny as Anri's descendant, but was killed in Gra's betrayal. Gharnef took the blade and kept it safe for the majority of the war. Two years later, the blade was retrieved from Gharnef's corpse by Marth, Cornelius's son, who used it to slay Medeus for the second time.

In the year 607, in the initiating act of the War of Heroes, the forces of the Holy Empire of Archanea invaded and conquered Altea while Prince Marth was on an expedition in Grust, and the blade was again taken by the revived Gharnef. It was not recovered until the last moments of the war where Gharnef was defeated again, and from there Marth used it to again slay Medeus, now resurrected as a true Shadow Dragon.

As the following millennia passed, Falchion's divine blessing waned over time, and the parts which were not the blade itself began to decay and lose their durability; as a result, the sword was continually given new hilts over the ages, with the hilt coming to take an entirely different shape as a result of these repairs.[1] Eventually, it came into the possession of the royal family of Ylisse, the descendants of Marth, and was used by the nation's founder to defeat the Fell Dragon Grima.

Another millennia later, this weakened Falchion (Japanese: 封剣ファルシオン Sealed Sword Falcion) was inherited by Chrom, Ylisse's prince, and used in his wars against Plegia, Valm and the Grimleal, and once against Vallite soldiers. The Falchion's full power was revived by Naga herself to facilitate Grima's defeat following his revival, restoring it to the state of Exalted Falchion (Japanese: 神剣ファルシオン Divine Sword Falchion).

A second, time-displaced incarnation of Falchion, dubbed the Parallel Falchion, was brought back by Chrom's daughter Lucina from her disastrous future. 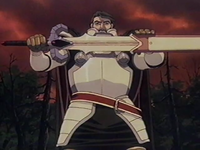 Cornelius unsheathing Falchion in the anime.

In a flashback in the first episode, Prince of Aritia, Cornelius was the bearer of Falchion (rendered in the English dub as Falcion) as in the games during the Gra betrayal. He attempted to use it to fight Gharnef, but failed and was slain. The anime's visual depiction of Falchion differs greatly from the games' depictions: its hilt is a steel-blue with a gold blade, and the sword crackles with electricity as Cornelius unsheaths it. During his attack on Gharnef, Cornelius uses it to parry some of the Imhullu tendrils launched at him.

In "The Great Cave Offensive", Falchion appears as one of several obtainable treasures referencing other Nintendo franchises, worth 325,000 gold. In the English version of Super Star, it was just called "Sword" as it predated the international presence of the Fire Emblem franchise; the name "Falchion" was restored to it in Super Star Ultra, the game's remake. 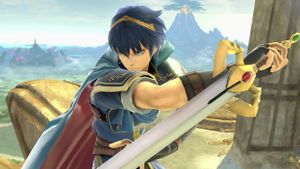 Falchion makes several other appearances in Super Smash Bros. in various roles. The silhouette of the Mystery version of Falchion is used by the games as the icon representing the Fire Emblem series as a whole. Additionally, Chrom wields his version of Falchion from Awakening in his appearance in Robin's Final Smash, Pair Up. Lucina also wields her Falchion variant, the Parallel Falchion, in her playable appearance.

As part of the Chrom and Lucina armor set crossover promotion, the Wii U version of Monster Hunter: Frontier G features Falchion as a usable weapon. Chrom's armor set is accompanied by his basic Falchion (Japanese: 封剣ファルシオンI Sealed Sword Falcion I), while Lucina's armor set instead gets her Parallel Falchion variant (Japanese: 裏剣ファルシオンI Reverse Sword Falcion I); both are paired with the Fire Emblem as a shield and single-handed sword set.

Chrom and Lucina both use their respective Falchions in Project X Zone 2 as their main weapons, used mainly in their Dual Falchions and Fire Emblem: Awakening moves. The Exalted Falchion is also a piece of gear, raising ATK by 297 and TEC by 50.

As part of a collaboration coinciding with the release of Fire Emblem Heroes, an accessory based on the Falchion was made available in Miitomo. Between February 3rd and March 2nd, 2017, users had the opportunity to purchase it from the Miitomo Shop.[3]

The version of Falchion from the Archanean games was part of the login-bonuses that players were able to receive during the "Fire Emblem: Kindred Ties" event with more copies being rewarded from playing the event itself. It is a weapon of the Fire element and held the ability "Primed Recovery" prior to game version 2.0.

The modified version of the weapon from Fire Emblem Awakening also appears in the event, wielded by Chrom of Ylisse, though there is no weapon data for it in the game and it is unobtainable as a weapon by the player. 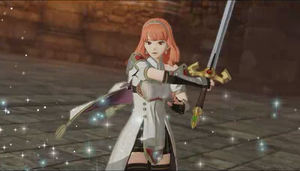 Celica wielding Falchion in a prerendered cutscene in Warriors.