In Awakening he is a Plegian troop captain tasked with leading a small contingent of Plegian soldiers on an assault on Southtown, a Ylissean city, as part of a bid to provoke Ylisse into war with Plegia.

In Tokyo Mirage Sessions ♯FE he is a rogue Mirage appearing as the first boss of the game. Like in Awakening, Chrom helps defeat him.

Garrick serves as the boss of Awakening's prologue, though he isn't the first boss of the entire game; he is fought after Validar in the Premonition.

Garrick is a member of the Plegian military sent by Gangrel, under the guise of a common bandit, to sow chaos in Ylisse; this is a common occurrence in recent times.[1] Garrick and his underlings set Southtown aflame; alerting Chrom and the Shepherds to his presence.

Garrick is the first boss of Tokyo Mirage Sessions ♯FE. He is the Mirage that is possessing Teru Gojuin, though this is only revealed later in the game when he is fought again during Chapter 6: Fire Emblem after being revived by Medeus. In both instances he is defeated by Itsuki with the aid of Chrom. 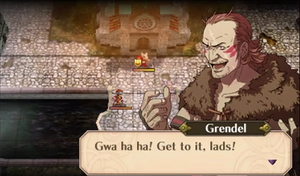