Ephraim (pronounced /⁠ˈɛfɹəm⁠/[key][2] or /⁠'eɪfrʌm⁠/[key][3]; Japanese: エフラム Ephraim) is the prince of Renais and one of the main characters of Fire Emblem: The Sacred Stones. He first appears in Chapter 5x. He is the twin brother of Eirika and wields lances instead of swords like his sister. He holds the Solar Bracelet his late father, King Fado had given him.[4] At the start of the game he launches a campaign against Grado to protect Renais as much as he can.

He is friends with Prince Lyon of Grado[5][6][7] and has a somewhat friendly rivalry with Prince Innes of Frelia.[8] He also has a kind heart as shown several times in the game, to the point where he'd rather protect his sister than complete his own imperative tasks.[9][10]

In the start of the game, Ephraim is missing, apparently fighting in Grado.[11] Eirika goes to search for him;[12] in Chapter 5x he captures Fort Renvall with the help of Kyle, Forde, and Orson.[13] However, he is forced to escape because he cannot hold the fort with his small force,[14] and General Valter of Grado comes to intercept him.[15] Still, he is able to escape.[16] Sometime soon after, he rescues Myrrh, a manakete that had been captured and her dragonstone stolen.[17][18]

At the same time Eirika is tricked by Orson Ephraim circles back from what could have been an assault on Grado's capitol to help Eirika capture Renvall.[19] After Renvall falls once again, the two head back to Frelia for King Hayden's advice on what to do next. On the way, they stop by Serafew and reminisce of their times with their former friend Lyon, prince of Grado.[20] When they arrive in Frelia, they decide that Eirika will head to Rausten to warn them of Grado,[21] who is trying to destroy the Sacred Stones, and Ephraim will go to Grado itself.[22] The player can then choose to go with Eirika or Ephraim.

Ephraim proceeds to Grado, first heading to Fort Rigwald.[23] He continues into Grado territory and meets his former mentor Duessel, a general of Grado branded a traitor.[24] He informs Ephraim of a Dark Stone, which somehow changed the emperor and is being carried by Lyon.[25] He decides to take a ship across the ocean to Taizel, and along the way he fights off many monsters on the sea. Upon landing in Taizel, the party is assaulted by Grado forces, along with several monsters. They manage to defeat them; however, Myrrh flees to the east for unknown reasons, and Ephraim decides to follow her.

Upon finding Myrrh, she says that she had been looking for her dragonstone, which Selena had come into possession of;[26] Selena, a general of Grado, engages Ephraim. He defeats her, and continues to Grado Keep, the castle at the capital city. He manages to defeat Vigarde, the king of Grado, but his body disappears mysteriously.[27] He then meets Lyon, who tells him he had started the war.[28] In the dungeons, Ephraim meets a shaman named Knoll, who reveals to him the story about Lyon's actions.[29] Suddenly, Ephraim is informed that Eirika is under attack in Jehanna; he hurries over to help her.[30] Together, reunited, they are able to defeat Generals Caellach and Valter in one battle.

When he and Eirika reunite and return to Renais, they see its deplorable condition under Orson who does not even care for the country itself; he lets bandits run free and citizens revolt.[31] When Orson is defeated, he finds out why Orson betrayed him—he was promised his dead wife revived.[32][33] His wife Monica was "alive", in an undead state, not really alive, much like Vigarde. Ephraim proceeds with Seth and his sister to the throne room, where they raise their bracelets,[34] to unseal the Sacred Stone of Renais and the Sacred Twins, Siegmund the fire lance and Sieglinde the thunder sword.

They head to the Narube River and meet Lyon, who is revealed to have been taken over by the Demon King of old legends.[35] They follow Lyon to the north, where Ephraim meets him at Mount Neleras, a mountain full of monsters and lava. After the monsters are defeated, Lyon teleports to Ephraim. Ephraim is enraged and loses his composure, a rare occurrence, and charges at Lyon; however, Lyon immobilizes his body,[36] forcefully takes the Sacred Stone, and destroys it.[37] However, Lyon appears to change back to normal and confesses that he is willingly doing this to help his nation. Ephraim does not believe him, but Lyon warns him that he will perform a ritual to gain great power and avert disaster in Darkling Woods;[38] he then flees.

Ephraim and Eirika head to Rausten to recover the last remaining Sacred Stone. There, they are attacked by remnants of the Grado army led by Riev, but they are able to hold off, and he flees. The twins receive the Sacred Stone of Rausten[39] and then head to Darkling Woods, and then the Black Temple. He confronts Lyon and is able to defeat him and his horde of monsters. Before he dies, Lyon states that he had always wanted to be Ephraim. Afterwards, the Demon King rises up, but with the power of Rausten's Sacred Stone and their own willpower,[40] Ephraim's army is able to defeat the Demon King and seal him away.

After the war ends, Ephraim ascends to the throne of Renais. When he hears about a massive landslide that has ravaged Grado, he decides to travel there and help out, in accordance with Lyon's wishes.

Ephraim's stats may be higher than the listed ranges if he used stat-boosting items or surpassed level 15 before Chapter 9.

On his own route, Ephraim has very strong combat. He joins underleveled, but with great bases for his level, so his stats manage to be above average at his join time. His good growths in every stat should keep him at least on par with other units. What really sets Ephraim apart is his personal weaponry. He joins with the Reginleif, which has absolutely amazing stats, including 45 uses and 30 Mt against horse-riding and armored units. Thanks to his good speed, Ephraim will be able to ORKO any unit the Reginleif is effective against. Much later he also gets the Siegmund, which is even better. It has an obscene 22 Mt versus non-monster-type enemies and 39 Mt versus monsters, which are plentiful in the remaining chapters of the game.

Despite his great combat, Ephraim is held back by his 5 Move, which is always unfortunate but particularly so in The Sacred Stones, a game heavily dominated by mounted units. Ephraim sometimes struggles to find things to kill that were not already killed by units with higher Move. His promotion will fix this, but comes significantly later than the rest of your army's promotions. However, there are still rout maps on which he can soak up EXP.

Ephraim's stats will be lower in Eirika's route. There, he joins in Chapter 15 and has few opportunities to gain experience. However, the Reginleif and Siegmund will have the same stats. As such, his performance, while worse than on his own route, is still at least respectable. He may fail to stand out enough to earn a deployment slot, though.

Ephraim makes several appearances in the downloadable content of Fire Emblem Awakening. In the Champions of Yore and Smash Brethren series, he appears as an enemy. He aids the player's army as an NPC in Rogues & Redeemers 1, and can be recruited upon completion of the chapter. He returns to the enemy side in Rogues & Redeemers 2 and 3.

As with several other legacy characters in Awakening, there is a unique weapon named for Ephraim available through the Barracks or event tiles: Ephraim's Lnce.

Like all male bonus units in Awakening, Ephraim has access to all base class and advanced class skills available to standard male units.

In addition, each version of Ephraim can also receive one of the following as a personal skill:

Ephraim: Restoration Lord is only available at 5★ rarity.

Ephraim: Legendary Lord is only available at 5★ rarity.

Ephraim: Sacred Twin Lord is only available at 5★ rarity.

Ephraim: Sparkling Gallantly is only available at 5★ rarity.

Ephraim: Dynastic Duo is only available at 5★ rarity.

Ephraim is very brave and courageous. Although he is not very knowledgeable in history,[41] he is viewed as a suited king to the throne by Duessel and others. He is passionate about his goals, and also very caring about others, such as how he very actively wants to protect his twin sister Eirika.

Ephraim is the prince of Renais; in all of his endings, he is crowned king of Renais.

He also knows the siblings Innes and Tana, the prince and princess of Frelia. He is quite friendly with both, and a rival to Innes. He has two loyal knights serving him, Forde and Kyle. Duessel, a general of Grado, had been a sort of lance trainer for him. He had been close friends with Lyon, prince of Grado, before the war. Sometime between Chapters 5x and 8, he finds Myrrh, a shy Manakete, and she becomes quite close to him.

Ephraim, Restoration King
Busy days awaited him upon his return to Renais. He oversaw the rebuilding not only of his country but also of the entire continent of Magvel. His work was difficult, but his success made him a legend.

Ephraim and Eirika
Busy days awaited Eirika and Ephraim as they struggled to rebuild Renais. Their work gave new hope to those ravaged by the war, and with Eirika's constant help, Ephraim grew to be a trusted and honorable king.

Ephraim and Myrrh
After the war, Ephraim returned to Renais and Myrrh to Darkling Woods. They both turned their attention to their respective duties but never forgot one another. Though Myrrh never again left Darkling Woods, Ephraim often visited her.

Ephraim and Tana
Once Renais was stable again, Ephraim and Tana were wed. Innes protested vocally, but when he saw how happy Tana was, he gave the marriage his blessings. Renais and Frelia are now bound by blood as well as friendship.

Ephraim appears in Super Smash Bros. Brawl as a sticker, along with Eirika, Joshua, and Myrrh.

Ephraim is featured on eight cards in Fire Emblem Cipher.

Four of the below cards' epithets are still in raw, untranslated Japanese; these need translation.

Ephraim appears as an Ace Attack-type spirit in Super Smash Bros. Ultimate, using his art from Fire Emblem: The Sacred Stones. When equipped by a player character, he grants two support spirit slots. 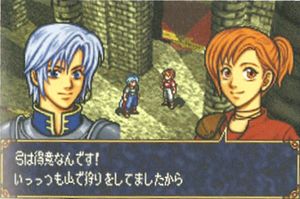 The only known screenshot of Fire Emblem 64, featured in the 25th anniversary book. The characters are Ephraim (left) and Rei (right).[42]