Boey (Japanese: ボーイ Boowy) is a playable character in Fire Emblem Gaiden and its remake, Fire Emblem Echoes: Shadows of Valentia. He is a friend of Mae and, alongside her, is tasked with ensuring Celica's safety on her pilgrimage to the Temple of Mila.

Boey is one of the first characters to join Celica's group, he resides in Nomah's Mila Shrine with Celica and Mae.

Boey is playable as a SpotPass character, released in the Gaiden character set.

Additionally, Boey appears as an enemy unit in the DLC chapter Lost Bloodlines 2.

Like all male bonus units in Awakening, Boey has access to all base class and advanced class skills available to standard male units.

In addition, Boey can also receive the following as a personal skill:

Boey's role is greatly expanded here when compared to his role in Gaiden. He takes the role of one of Celica's protectors on her journey toward the Temple of Mila, alongside fellow mage Mae. The two often butt heads throughout the story, while also giving their own input to events as the story progresses and offering Celica advice.

In contrast to Mae, Boey is a much more defensive mage. He has the same starting class as her, but is better off attacking from a distance than being up front. His 55% HP growth and surprising 35% defense growth give him the ability to take several hits from opponents considering his class's frailty. His skill growth is high, and his 50% attack growth is good. One of the main issues with Boey is his mere 4 movement and 4 base speed with a poor growth. Boey stalls the team in desert and swamp levels and he generally is in the back of the army. Boey's set of spells is similar to Mae's, but does have a few differences. Unlike Mae, who immediately has Thunder, Boey starts out with Fire as his only spell, and it is not a powerful attack. However, he does learn Thunder at level 3, an attack that allows him to defeat opponents from a distance. Boey gets access to Sagittae at level 12, allowing him to easily take care of the terrors in act 4 and giving him an excellent move to have once he gets promoted. At level 18, Boey learns Excalibur, which can be used as a suitable replacement for Fire. The last spell Boey learns is Recover, upon becoming a Sage. This gives him the ability to heal his allies, but because Boey only has 4 movement, he often ends up too far behind his allies to heal them. As a character, Boey is a relatively weak character to start with, but once he reaches level 12, he becomes a suitable attacker. By using the sacred springs found throughout Valentia, Boey is able to become a reliable unit, but then other units won't benefit from the stat boosts.

In conclusion, Boey often is in Mae's shadow as the mage on Celica's army, but he does become more reliable through promoting.

Boey is one of the characters added to the game in the Rite of Shadows update, and became available for summoning by players on May 15, 2017. Only one variation of Boey is currently available in Heroes, based on his Echoes: Shadows of Valentia incarnation.

Boey grew up in a small fishing village as the son of a poor fisherman. Due to his family's struggles to take care of him and his siblings during trying times, Boey was sent to the priory prior to the start of Shadows of Valentia. His humility is a standout trait of his, as is his sense of duty. Unlike Mae, who sees and speaks to Celica more like a friend, Boey always acknowledges their difference in background, opting to call Celica "milady" instead of addressing her by name. This may stem from his poor upbringing making him more aware of their contrast.

In his support conversations with Mae, Boey explains that he was always prepared for the day he would need to use his magic to protect Celica, having acknowledged and come to terms with the fact that it would likely mean taking enemy lives with it. However, Boey has a notable fear of Terrors, and Necrodragons in particular.

His relationship with Mae is a competitive one, with the two bickering throughout the game, often about each other's perceived inadequacies. This eventually blossoms into a romance once the two reach their A Support level, and culminates in their marriage in the game's epilogue.

If Mae survived
As always, he does nothing but bicker with Mae. Perhaps, for the two of them, that is true happiness?

If Mae did not survive
Now that Mae's gone before him, he realizes his own heart for the first time. However, time cannot be turned back.

If Mae survived
After returning to the priory on Novis, Boey weathered a trying courtship with Mae until the two were wed. Children came soon and in plentiful number, giving the pair a host of new excuses to argue. Joy takes curious forms at times, but Boey was a happy man indeed.

If Mae did not survive
Only after losing Mae did Boey realize the nature and intensity of his feelings for her. Wracked with regret, he poured himself into his work, ultimately succeeding Nomah as high priest of the priory. He spent his life there aiding the poor in humble—yet rewarding—service. 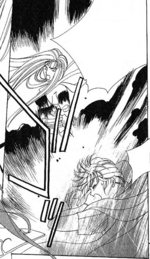 Boey has a very minor role in the manga, making a quick appearance being attacked by Sonya. He does not have any dialogue, other than a scream when hit by Sonya's attack.

Boey is featured on five cards in Fire Emblem Cipher.