Parthia (Japanese: パルティア Parthia) is a regalia bow introduced in Fire Emblem: Shadow Dragon & the Blade of Light. It is one of the Three Regalia of the holy kingdom of Archanea, known by the epithet "bow of flame",[1] and is the sister weapon of Gradivus and Mercurius.

Parthia was stolen from its unidentified origin by the thief Adrah, and in conjunction with Mercurius and Gradivus was a valuable asset in his conquering of the land, allowing him to ultimately establish the Kingdom of Archanea. Upon the kingdom's foundation and Adrah's appointment as its first king, Parthia was named one of its Three Regalia, and was passed down through the generations of Archanean royalty; with the other Regalia, it took on a mythical status in Archanean culture, claimed by some to be usable only by those blessed by the gods.[1]

Centuries later in the War of Shadows, Parthia was the only Regalia to not be lost to the Dolhr Empire following their invasion of Archanea, and upon reclaiming the Archanean capital, Princess Nyna found it and granted it to Marth, the current wielder of the Fire Emblem and therefore her champion, for use in the war. After the War of Shadows, Marth returned Parthia to Nyna, who then bestowed it to Jeorge on appointing the new archer-captain of Archanea's knights. Jeorge wielded it in the intervening years until the War of Heroes, when Emperor Hardin assigned him to Lang, once the latter is killed, to protect Chiasmir Bridge. At Chiasmir, Jeorge was convinced by his pupil Gordin and Marth to defect to the Altean army, whereupon he used Parthia to oppose Hardin.

On the continent of Fódlan, a rusted bow bearing the name Parthia could be found in the clutches of roaming monsters, taken into the possession of the mercenary Byleth, and used in the war plaguing the continent. What connection this Parthia bears to the Archanean regalia, if one exists, is unclear. 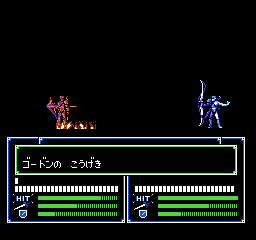 A shot fired by Parthia in Shadow Dragon & the Blade of Light.