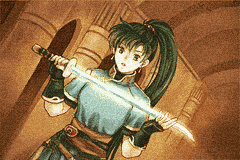 Lyn unsheathing the Mani Katti, her personal weapon, for the first time.

Personal weapons (Japanese: 専用武器 personal weapons) are weapons which are restricted to be usable only by a limited group of units, or more commonly, a single unit. This concept has existed since Fire Emblem: Shadow Dragon & the Blade of Light, with weapons like Marth's Falchion and Linde's Aura, and has appeared in every game since in some capacity.

"Personal weapon" is a somewhat generic term used to refer to the concept, with different games referring to them by different names. Most Japanese versions use a ★ to symbolise a personal weapon, described as a "star weapon". The English releases of The Blazing Blade, The Sacred Stones and Path of Radiance give personal weapons the rank of "Prf", presumably short for "preferred". Some games in both languages simply do not use a special denotation, and instead list the weapon's required rank or weapon level as a blank, "--". From Shadow Dragon onward, personal weapons have actual weapon levels (normally ranked E, but higher ranks have occurred, in which case the wielder must have the required rank to wield it) with the personal weapon status instead denoted in their description.

The series' most prominent example of a personal weapon is the Rapier. It is a personal weapon in eight of the sixteen games, traditionally acting as the starting weapon for one of the main lord characters of the game (Marth, Roy, Eliwood, Eirika). Most other starting personal weapons for units are essentially copies of its anti-mounted/armor abilities for other weapon types, like the Reginleif, Wolf Beil, and Thani.

It should be noted that all of the main regalia weapons used by the protagonists are counted as their personal weapons, like Sigurd's and Seliph's Tyrfing, Ike's Ragnell, Corrin's Yato, and Byleth's Sword of the Creator.

Generally speaking, they have a unique or uncommon added effect, and are either a starting weapon for the unit (or gained very soon after the unit appears), or are their most powerful end-game weapon. Personal weapons come in three varieties: weapons locked to specific characters (this is the variety to which the term normally applies), weapons locked to specific classes, and weapons locked based on the gender of characters. In addition, most personal weapons are either the only ones of their type to be found in the game, or, if there exist more than one, appear very rarely.

In Genealogy of the Holy War the Holy Blood mechanic is an expanded version of personal weapons and the ability to exclusively pass down the ability to use a certain weapon from parent to child is a major gameplay mechanic.

The in-universe justifications for personal weapons varies by game and by weapon itself. Not every weapon lock has an in-universe explanation, however.

Some weapons are simply a character's preferred weapon in combat, while others are locked to characters through magical means. For instance, Hector's Wolf Beil and numerous lord's rapiers do not appear to have magic-related locks, and are simply used only by certain characters due to personal preference.

Even the means of magic locking the weapon can be different. In The Blazing Blade, Lyn's Mani Katti is stated to be a "spirit-inhabited sword", and chose her as its wielder when she picked it up; Lyn is the only person able to draw it from its sheath. Glass, who was not favored by the Mani Katti, was unable to draw it from its sheath. In Awakening, Lucina explains to her sibling that if someone other than the chosen wielder attempts to use Falchion, its blade will be "dull as a stone". In Echoes: Shadows of Valentia, the Royal Sword is said to be impossible to lift by anyone not of royal blood; Tobin claims that the sword "weighs a ton", while Alm finds it "light as a feather".

There are many weapons also locked by bloodline, which, as mentioned above, is a major mechanic in Genealogy of the Holy War, though this method also appears in other games. Often, weapons that are blood locked rely on the wielder to have or be descended from one with the gifted blood of a dragon, though weapons linked solely to human bloodlines, like Aura, exist. It is not always explicitly stated what happens if an unworthy wielder uses a physical weapon, though tomes that are magically locked to individuals fail to function and are no more than paperweights.

In Genealogy of the Holy War, there is a variation on the standard personal weapon system governed by its unique Holy Blood system, wherein a unit's ability to use one of the weapons is tied to whether or not they possess the matching major holy blood. While several units in both generations have major holy blood, for the second generation the majority of possessors of holy blood, and thus of the weapons, are determined by the pairings of the parents possessing the holy blood in question in the first generation.

In addition to the thirteen weapons governed by holy blood, there are a handful of weapons locked by class and gender.

Personal weapons in the GBA games, other than Eckesachs, are all locked to classes rather than characters.

The way in which Shadow Dragon structured the weapons system resulted in all personal weapons herein still having a normal weapon level; while for most of these weapons said rank is the base rank E, some have a higher rank requiring that a personal weapon's wielder still requires that rank before using the weapon. Additionally, some weapons which were originally full personal weapons allow for greater leeway in accessibility: they can be used by any unit of a certain gender, but have a high weapon level, while still allowing one specific wielder to use them at any rank.

With the implementation of the reclass system, there is the additional caveat that a unit must be of a class able to use the relevant weapon type before they can use the personal weapon; thus, in the case of Aum, of the many units capable of using it only half are of the correct class in the first place, and the others will need to be reclassed before they can use it.

The system remains the same as in Gaiden.

Personal weapons work differently than they do in previous games. Strictly speaking, no weapons are personal; any unit can use any weapon or equipment, but their Crest—or lack thereof—will affect the potency of the item. There are fifteen Heroes' Relics, including Aymr, and ten Sacred Relics.

Heroes' Relics and Aymr require a weapon level of E to use, meaning any unit can use them, but only units with the correlating Crest can use the weapon's unique combat art, while units with no Crest will suffer 10 damage for using the relic in a battle. The Sword of the Creator is an exception to this, as it is tied to Byleth rather than a particular Crest; units with no Crest will not take damage for using it, but it will have greatly increased weight and reduced range when used by anyone other than Byleth. All Heroes Relics have a golden item sprite.

In Fire Emblem Warriors, all personal weapons are E-Rank and aren't as powerful as the other weapons. With the exception of Chrom's Training Sword and Tiki's Tear, after using a specific scroll found in History Mode and performing 10,000 kills with the weapon, the weapon will be upgraded to the level of an A-Rank weapon. None of them can be used for Forging Material.

The system remains the same as in Three Houses.