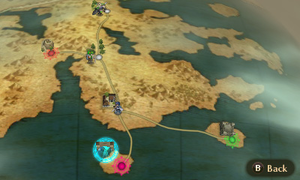 Navigating the world map in Awakening.

The world map (Japanese: フリーマップ free map) is a gameplay navigation system introduced in Fire Emblem Gaiden. In it, as opposed to the linear and uninterrupted chapter progression in most games in the Fire Emblem series, the player can freely traverse the world at their own pace, fighting marauding bands of enemies which appear and visiting shops in between chapters, and starting said chapters whenever they so choose.

A traversable world map has appeared in Fire Emblem Gaiden and its remake Shadows of Valentia, The Sacred Stones, and Awakening. Fire Emblem Fates, Three Houses, and Warriors each have world maps that cannot be directly traversed, but does show where selected battles are. In all other games—except for Fire Emblem: Shadow Dragon & the Blade of Light—there is a world map present, but it is used only to show where the party is traveling between chapters, usually accompanied by narration.

Every battle within Gaiden is technically a skirmish, with the main story mostly consisting of pre-defined skirmishes against set enemy groups posted at specific locations on the world map. In addition, more enemy groups are spawned from certain locations periodically, and will move at random around the map after a certain number of turns pass; these marauding groups can be fought on their own, and can also join up with other enemy groups (both pre-defined and marauding) and both be fought at once. Skirmishes are initiated by choosing to travel to a location with an enemy group posted on it; conversely, however, enemies can also advance on the player's location and initiate skirmishes themselves.

A small few locations—mostly villages, castles, fortresses, and dungeons—can be visited outside of battles, and in these the character in question can freely move around and interact with the locals. Some villages contain item exchange couriers who can send a specific item to the other character's party; however, these are limited in number and have only a finite number of uses.

In The Sacred Stones, the player navigates Eirika or Ephraim around the world map by directly selecting their destination. Unlike Gaiden or Awakening, on some occasions multiple chapters will occur on the same world map location and the player is not allowed to return to the world map between each of these chapters. Some locations also offer armories or vendors to be accessed on the world map, usually selling the same items available in the matching shops in the chapter in question; additionally, after the game has been cleared and Creature Campaign mode has been entered, secret shops can also be accessed from the world map, albeit with different stock than what was offered in the original chapters.

After the completion of every chapter from Chapter 8 onward, or after leaving the Tower of Valni or Lagdou Ruins, up to three bands of enemy monsters will randomly spawn on certain locations on the world map. Eirika and Ephraim cannot pass through any location presently occupied by a monster band, and must engage the monsters in a skirmish before they can access or pass through the location again. This will usually not impede the player's ability to travel, especially later in the game, as the world map connects numerous paths between locations and usually provides an alternative.

In Awakening, the player directly navigates between locations on the world map by pointing the Circle Pad or directional pad, rather than having to explicitly select a destination; there is also the option to press the Start button at any time to be automatically taken to the location of the next main chapter. All paralogues are exempt from the chapter order and can be challenged at any time and in any order once unlocked. All locations on the map, save for the Outrealm Gate and the Endgame's location, house an armory which is occasionally taken over by the appearance of a traveling merchant.

As with The Sacred Stones, Risen bands periodically appear to create skirmishes, but this time the player is not forced to defeat them to enter or pass the location, although the armory cannot be accessed while a Risen group is present. On rare occasions, two groups of Risen will appear on the same map location and are fought simultaneously, rewarding the player with both a sum of gold and a rare item. Additionally, bonus units and the teams they lead will spawn on the map to be parleyed with when the Nintendo 3DS console receives a StreetPass tag, and SpotPass bonus unit teams can be summoned to the world map at any time through the Wireless menu, with a maximum of ten allowed to be on the fully unlocked map at a time.

Much like Awakening, bandits periodically appear to create skirmishes in the Birthright and Revelation campaigns. Additionally, the player can pay a fee to spawn a group of bandits when selecting a location of the map; a maximum of two groups of bandits may be present at any map location. Fighting two groups of bandits simultaneously is also more likely to reward the player with a rare item in addition to a sum of gold.

Access to the Dragon's Gate—and by extension, all downloadable content—is granted after Chapter 6 has been cleared.

The world map in Fire Emblem Warriors is more akin to a level select than a truly explorable world map. Each of the 12 world map locations corresponds to one or more of the game's story chapters. As the player scrolls through the chapter select, the corresponding world map location is highlighted. The player may replay any chapter they like; skirmishes are not present. The Premonition chapter cannot be replayed.