Ragnell (Japanese: ラグネル Ragnell), referred to as the sacred blade (Japanese: 神剣 divine sword), is a regalia sword introduced in Fire Emblem: Path of Radiance. It is one of the national treasures of the Begnion Empire, once wielded by the beorc heroine Altina alongside its sister blade Alondite. It was blessed by the Goddess of Order Ashera, granting it immense power and rendering it invulnerable. In addition to its sheer power, the blade can be used to sling powerful shockwaves to attack from afar.

Along with Alondite, the newly-blessed Ragnell was bestowed upon Altina of the Three Heroes of Tellius, for use in combating the Chaos Goddess Yune, in the antiquity of Tellius. Following Yune's imprisonment within the Fire Emblem, Ragnell and Alondite became national treasures of Begnion, the kingdom founded and first ruled by Altina.[1]

In the modern Tellius era, Ragnell was famously used on multiple occasions by the Radiant Hero, Ike. During the Mad King's War against Daein in Path of Radiance, Ragnell came into Ike's possession through the Black Knight, who attempted to have Ike's father Greil wield it in a duel. Following Greil's defeat and death, Ike took the sword with him, but refused to use it until his own duel against the Black Knight in Chapter 27. At the end of the War, Ike returned the blade to Sanaki, Begnion's empress.

Three years later in Radiant Dawn, Sanaki gave Ragnell back to Ike after naming him supreme commander of the combined armies of Crimea, Begnion, Gallia, and Phoenicis in the war against the Begnion faction controlled by Lekain. Later, when storming the Tower of Guidance, the blade was blessed by Yune for use against Ashera and her Disciples of Order; Ike used it in combination with Yune's power to perform the final blow to defeat Ashera.

Millennia later by the time of Fire Emblem Awakening, the sword had entered the possession of Ike's distant descendant Priam. By this point, it appears that Ashera and Yune's blessings upon the blade had begun to fade: it is noticeably duller in color, is riddled with numerous cracks from eons of use, is slightly weaker, is no longer impervious to wear, and can no longer fire shockwaves (though it can still be thrown from afar). Ragnell is also no longer restricted to just one character, as anyone with a high enough sword proficiency can wield it.

Ragnell appears again in Fire Emblem Fates and Fire Emblem Echoes: Shadows of Valentia, appearing with Ike when his amiibo is scanned. It acts much like how it did in the Tellius games and is unable to be removed from Ike's inventory.

For information pertaining to Ragnell's contribution to Altina's personal skill in Heroes, a fusion of this weapon with Alondite, see Ragnell·Alondite. 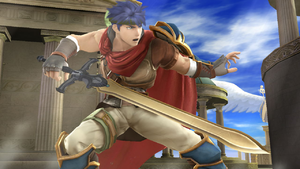 Ike wielding Ragnell in Super Smash Bros. for Wii U.

Ragnell appears as Ike's weapon in Super Smash Bros. Brawl and Super Smash Bros. for Nintendo 3DS and Wii U, retaining its undamaged pre-Awakening design. Ike uses Ragnell for all of his moves, with the exception of the first two strikes of his neutral attack and his pummel and throws. Unlike Marth's Falchion or Roy's Binding Blade, Ragnell does not have a sweet spot, and every attack Ike makes with it is equally strong across all parts of the blade.

Like the Super Smash Bros. Melee portrayal of the Binding Blade, Super Smash Bros. depicts it as being imbued with fire powers which can be channeled by Ike in his Eruption move; when performing Eruption, the blade radiates red flames in Brawl, but in for 3DS and Wii U, these were replaced with blue flames which more faithfully depict events in Radiant Dawn. However, unlike how it acts in the mainstream Fire Emblem games, Ragnell cannot fire shockwaves or be thrown, other than through the Aether animation where it is projected upwards and then grabbed by Ike.

Ragnell is Ike's main weapon in his guest appearance in Code Name: S.T.E.A.M. As in Path of Radiance and Radiant Dawn, Ike can use it to sling shockwaves at foes over an impressive distance.[2] Even though each of its hits is very weak compared to other weapons, its range is immense and classed as among the best in the game. One use of Ragnell consumes four units of steam.

Ragnell is present as a skill on two of Ike's cards in Fire Emblem Cipher: S05-001ST Brave Crimean General, Ike, and B03-001SR Brave General of the Blessed Blade, Ike. It is a Level S Skill which can be activated by the player if Ike is in a stack of 3 or more cards. For the cost of flipping one bond card, the player may activate Ragnell to increase Ike's range to 1-2 until the end of the turn. However, it can only be used if Ike is positioned in the player's Vanguard.