Arthur (Genealogy of the Holy War)

Arthur (Japanese: アーサー Arthur) is a playable character in Fire Emblem: Genealogy of the Holy War. He first appears in Chapter 6.

A mage of the Thrud bloodline, Arthur was separated from his mother Tailtiu and sister Tine years ago. When he hears word of his family's whereabouts, he leaves Silesse, bringing with him a pendant as the only proof of his heritage. In his travel towards Ulster, he meets and befriends Fee or Hermina, a soldier in training from Silesse. The two ultimately end up fighting alongside Seliph and his liberation army.

Arthur's cousin Amid is Arthur's substitute character, and fills his role in the story if Tailtiu died or was not married in the first generation.

Arthur is a noble of House Friege, who are descendants of the crusader Thrud. His mother, Tailtiu, fought alongside Sigurd. After having been ambushed and defeated at Belhalla, Tailtiu hid in Silesse together with her son. However, a few years after this, she was found and taken back to her family's lands. Arthur, for unknown reasons, was left in Silesse. During his years living alone, he specialized in wind magic.

Several years later, he learns that his sister Tine is still alive in Ulster. He immediately leaves for Ulster, and at some point of his travel, he meets Fee or Hermina, a pegasus knight in training, who offers to take him to Grannvale. Once they reach Sophara, they meet Seliph's army, which is Fee's destination. He thanks her for the ride, and decides to pay her back in the form of company in Seliph's army.

As the army approaches Ulster, they are confronted by Friege's elite troops – and among them, a girl with a pendant indentical to his. Arthur recognizes her as Tine and explains their story to her, managing to convince her to join the Liberation Army.

After the Grannvale Empire is defeated, Arthur goes to his father's house to rule it. If his father was not a nobleman, he inherits House Friege.

Arthur is a level 2 Mage who joins in Chapter 6, the second generation's first chapter. His base stats are decent but not outstanding, and his defenses are feeble. He inherits minor Thrud Holy Blood from his mother, increasing his HP growth by 20% and his skill growth by 30%. This makes Arthur's attacks much more accurate as he gains levels. Regardless of his father, he will also have Wrath, allowing him to critically strike while his HP is below 50%. This can be exploited to get Arthur through tough arena fights.

Arthur will need to get through these arena fights because he joins as a foot unit regardless of his parentage. Being mounted is important in Genealogy because the game favors mounted units in many ways. Mounted units have access to Canto, move much faster through the game's massive maps, and are the best at exploiting movement-increasing road tiles. Since mounted units are so dominant, foot units fall behind the frontline very quickly, including Arthur.

However, Arthur has an excellent promotion bonus. He promotes to Mage Knight, giving him a B-rank in swords and raising all his magic ranks by one. Outside of statistical bonuses, he also gains a mount—and with it, +4 movement. This promotion singlehandedly lets Arthur keep up with the frontlines and contribute. For that reason, he should reach level 20 to promote as fast as possible.

Arthur's baseline combat has some issues, making getting him to level 20 a bit difficult. He does not have any combat skills other than Wrath unless he inherits some. His stats are also not very impressive, and he is unmounted. Even after promotion, his combat can be lackluster if he has not inherited good skills. For that reason, "optimal" fathers significantly improve Arthur's performance.

Azelle gives Arthur Follow-Up, allowing him to double enemies. Since Arthur joins with Wind, which has low weight, he reaches doubling thresholds easily in the early chapters. This also improves his performance in the arena, making him easier to get through all fights. Azelle passes down minor Fjalar Holy Blood as well, increasing Arthur's HP and magic growths. This makes Arthur much better at combat because he will be more durable and deal more damage.

Lewyn, on the other hand, passes down Adept and Critical. Adept is worse than Follow-Up because it is less reliable. Still, it allows Arthur to attack twice if it activates, and the lack of Follow-Up can be remedied by inheriting the Follow-Up Ring. Critical is another valuable bonus. It can sometimes let Arthur one-round an enemy he otherwise would not have killed. More importantly, Lewyn gives Arthur major Forseti Holy Blood. The blood gives +20% HP growth and +30% speed growth, making Arthur faster, more durable, and more evasive. It also offers Arthur the ability to inherit and wield Lewyn's Forseti tome.

Forseti is a Holy Weapon with 30 might, +10 skill, and +20 speed bonuses. While wielding it, Arthur is a combat prodigy capable of killing most enemies in a single combat round. If he is within the Wrath threshold, nobody will survive a hit from him. After promotion, the player will have access to a mounted Forseti user, an invaluable asset. A promoted Arthur with Lewyn as his father can reach and kill entire groups of enemies very fast, thanks to high movement and incredible combat potential. He is also excellent against bosses, including Holy Weapon users, and clears the arena without breaking a sweat.

Lex is another decent father for Arthur. Lex passes down minor Nál Holy Blood, increasing Arthur's defense and HP growths. Arthur becomes much more durable with these bonuses, especially against physical enemies. Lex also gives Arthur Vantage and Paragon. Paragon allows Arthur to reach level 20 and promote to Mage Knight much faster. Since promoting is so important to him, having a skill that increases experience gain is a godsend.

Vantage allows Arthur to strike first when he is attacked below 50% HP. In Genealogy, Vantage can be combined with Wrath, making Wrath-reliant strategies much better. The player can bring Arthur below 50% HP to activate Vantage and Wrath. Then, Arthur can kill an entire group of enemies on the enemy phase. Vantage will prevent Arthur from taking damage if he kills the enemy, and Wrath will guarantee a critical hit.

As long as Arthur deals enough damage to one-shot with a crit and is accurate enough to hit reliably, this is a great way to deal with enemy armies. The conditions may seem steep, but Arthur can fulfill them easily. Thanks to Arthur's minor Thrud Holy Blood, his skill base and growth are high, so he seldom faces accuracy issues. Arthur also has an A-rank in thunder magic after promotion, so he can wield the 20-might Thoron. With the Magic Ring in his inventory, he will have at least 15 magic after promotion. This leads to a minimum of 70 damage on a crit with Thoron equipped, assuming no level-ups in magic. Even though Arthur's magic base and growth are horrendous with Lex as his father, he still reaches high attack numbers. Since most enemies have low resistance, this is enough damage to one-shot.

Claud may seem like a good choice for Arthur since he is a magic-oriented unit. He gives Arthur minor Bragi Holy Blood, increasing many of his growths. +10% HP growth, +10% magic growth, +10% luck growth and +20% resistance growth are solid bonuses. However, these are the only benefits. Arthur cannot use staves even after promotion, so the Bragi blood's +1 to staff rank is lost. Claud also has no skills, so Arthur will only have Wrath. This renders Arthur's combat rather poor despite a solid magic growth. Arthur needs at least one combat skill to fight well. While he can use Wrath, setting it up requires effort and is not always possible.

Arthur is playable as a SpotPass character, released in the Genealogy of the Holy War second-generation character set. He is also present as an enemy in the first and third installments of the Lost Bloodlines DLC series.

Like all male bonus units in Awakening, Arthur has access to all base class and advanced class skills available to standard male units.

Arthur is one of the characters added to the game in the Revealing Lies update, and became available for summoning by players on April 18, 2022. Only one variation of Arthur is currently available in Heroes, based on his Genealogy of the Holy War incarnation.

Arthur: Furious Mage is only available at 5★ rarity.

Arthur appears to be fairly casual, claiming to be "hardly in a hurry" when told his planned travel to Ulster would be impossible on foot.[1] He and Fee have something of an argumentative relationship, with her claiming that he is generally self-centered, a position he does very little to dispel.[2] Arthur also is worried for his sister Tine, as searching for her is his reason for leaving Silesse, as well as vengeful towards Bloom and Hilda because of their abuse of her and their mother. In his quotes in Fire Emblem Heroes, he is shown to be extremely angry at Bloom and Hilda, at times to the point of losing his composure.[3]

See love for more details on the love system.

Among the unused data of the game, there are new portraits for several characters from Genealogy of the Holy War, including Arthur. This could mean that he was planned to appear in the game. 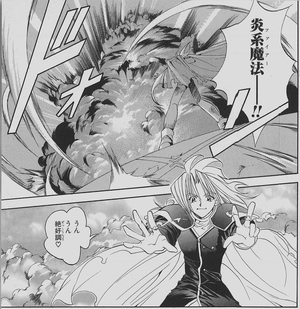 In this manga adaptation done by Nea Fuyuki, Arthur is first seen in Chapter 6, trying to wake up an unconscious Fee, who had been shot down by Febail and his Yewfelle. When the Liberation Army comes to them, Arthur asks them to help his friend, and later both of them join Seliph's group.

When the Liberation Army attempts to free Ulster, Arthur is deployed in Leif's group, the one in charge of storming the castle. Once inside the castle, they encounter a shy female mage, whom Arthur recognizes as his little sister Tine. However, before he can truly explain himself, Tine ends up as a hostage, so that Reptor can defeat the rebels. With the help of Shannan, Arthur manages to explain the situation and convince Tine to defect; her sudden change of heart gives Leif an opening to defeat Leptor.

In this incarnation, Arthur is boisterous and a bit disrespectful, acting most of the time as a comic relief.

Arthur is featured on three cards in Fire Emblem Cipher.

As both this Arthur and a Fates character with an identical English name have both featured in Cipher, there are a number of schemes devised among the fandom in order to differentiate the two. As this Arthur first appeared in Cipher after the Fates Arthur did, the full card names in the below box will treat this Arthur's name as "Arthur (Jugdral)", in line with how Japanese Cipher parlance differentiates Gray from Asugi, Deen from Deen, and Linda from Linde.