Ethlyn (Japanese: エスリン Ethlin) was a member of the Chalphy nobility of Grannvale, and the wife of Prince Quan of Leonster. She was an ally of her elder brother, Sigurd of Chalphy, in his battles with Verdane and Agustria and after he was deemed a traitor. Her children, Altena and Leif, would later play pivotal roles in assisting Sigurd's son Seliph in his liberation war against the Grannvale Empire. 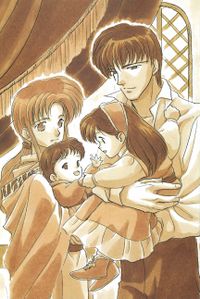 Ethlyn and her husband Quan, with their young children Altena and Leif.

Ethlyn is the youngest of the two children of Duke Byron. Her mother died during her youth, and for several years she took over taking care of her father and brother in her mother's place, which earned her a joking reputation as a nag according to Sigurd.[1] She appears to have been a friend of Edain of Yngvi during her time in Grannvale.[2] She eventually married Sigurd's longtime friend Quan and moved to Leonster with him, where she eventually gave birth to a daughter, Altena. The couple once visited Miletos, where Quan purchased a pearl tiara for Ethlyn as a gift; her son Leif would later hear this story and want to do the same for his own fiancée, Nanna.[3] During her time in Leonster, Ethlyn became close to the young Leonster knight Selphina and even treated her like a younger sister.[4]

In the year 757, Ethlyn learned of an attempted invasion of Grannvale by Verdane, and of how only Sigurd remained to defend her home. Ethlyn and Quan immediately departed for Chalphy to come to his aid, taking only Finn with them; before they left, Quan's father Calf left Gáe Bolg with Ethlyn just in case the conflict escalated, although after he told her the legend associated to it, Ethlyn was reluctant to give it to Quan.[5] Though Ethlyn apologized for dragging Quan into it, he remarked that he had just as much of an interest in helping Sigurd as she did.

Ethlyn and Quan remained with Sigurd's army through the wars with Verdane and Agustria. In the final battle with Agustria, following Deirdre's disappearance, Ethlyn finally gave Gáe Bolg to Quan; despite how she still feared its legend, Quan promised her it would not affect him. Ethlyn and Quan fled with Sigurd to Silesse after he was branded as a traitor and Reptor and Lombard came to arrest him, but she, Quan and Finn left soon after they arrived, returning to Leonster with the promise that they would come back with reinforcements to help clear Sigurd's name. While they were back in Leonster, Ethlyn gave birth to their second child, Leif. Although their time together after his birth was relatively brief, Ethlyn had a particularly close and happy motherly bond with Leif, to the point that Altena was jealous of her brother.[6]

In the spring of 760, Ethlyn and Quan set out with the Lanceritter to rejoin Sigurd and fight for his liberty. Despite Quan's insistence otherwise, Ethlyn took the infant Altena with her because she would not stop crying. Quan expected Ethlyn and Altena to leave partway through, once they reached the Aed Desert, but she insisted on staying "a little longer".

Neither of them had any idea that King Travant and a brigade of Thracian wyvern knights had been stalking them the entire time, following a tip from Veld.[7] The group was caught by the Thracians in the south of the Aed Desert, where none of them stood a chance of escaping through the thick sand. Despite her confidence that she and Quan could win if they fought together, both Ethlyn and Quan died to the Thracians. Of the Leonster party, Altena was the only survivor, and Travant took her from Ethlyn's corpse and raised her as his own daughter. This battle became known as the Aed Massacre, and led directly to the Fall of Leonster several years later.

Ethlyn is a playable character in the game's first generation. If either Quan or Ethlyn are defeated in battle while playable, both will leave the player's party. Both will leave the party, along with Finn, before the beginning of Chapter 4.

In Chapter 5, after Lubeck Castle has been seized, Ethlyn, Quan and a squad of Leonster knights will appear as partner units in the map's south-east corner. Her stats and class here are the same as they were when she left in Chapter 4, except for her items—she instead possesses an Iron Sword and Mend. As part of the map's story, she is expected to die to the Thracian army.

Ethlyn is the first unit in Sigurd's army capable of wielding staves, and the only one available in the Prologue. As she has a mount, Ethlyn can keep up with or catch up to other mounted units, and can use Canto to heal a unit inside an enemy's range before returning safely outside of it. Ethlyn's staff level is C, and it cannot improve beyond that; as her magic base is middling and her growth is very low, she relies on Mend to heal greater amounts of HP. C staves allows Ethlyn to use Return, which she can obtain in an event in Chapter 1 between her and Edain. Return sends a unit to the home castle, and grants its user 35 experience; Ethlyn (or any user) can be left at the home castle with another unit where she can use Return on them every turn, quickly leveling her up to bolster the experience ranking or to reach promotion faster. Her base skill and speed are high and her base resistance is good, so she's quite dodgy and can deal with mages well. In Chapter 1, if Ayra attacks her, she will have at base enough attack speed with a Slim Sword to avoid getting doubled and can survive one hit, but if Astra activates, she's doomed.

Ethlyn is capable of using A-level swords at base thanks to her Minor Baldr blood. Swords' low weight has only a minor impact on avoid (and will boost it against the numerous axe users in the first two chapters) and attack speed, and Ethlyn can use high-might swords to boost her attack or magic swords to take advantage of enemies' generally low resistance—in Chapter 2, she has an event with Deirdre which grants her a Light Brand, one such magic sword. However, Ethlyn's combat is limited by her low HP and defense—preventing her from reliably surviving multiple attacks from most enemies—and her lack of Follow-Up, which prevents her to double enemies in spite of her high speed. While Ethlyn has fairly high avoid, she cannot reliably dodge all enemies' attacks, and suffers greatly from failing to do so; additionally, her avoid is reduced against lance users, who are prevalent after Chapter 1. Ethlyn's only skill (aside from Canto) is Critical, which gives her a chance to critically hit an enemy (11% at base); this can enable her to get far into the arena (especially with the Brave Sword), but is not reliable on the battlefield—the combination bonus she can utilize from being Sigurd's sister or Quan's lover is more reliable and Sigurd or Quan can utilize it as well, though taking advantage of this bonus requires that she be near an enemy, potentially endangering her.

Once promoted to Paladin, Ethlyn gains +6 in both strength and defense, greatly increasing her damage and survivability. Her staff level does not increase, but she gains C lances; lances will weigh Ethlyn down more than swords and, though lances generally have higher might than swords, she is capable of wielding swords with higher might than the lances she can use.

Ethlyn has two children: Leif and Altena. Leif will inherit Ethlyn's items; he can inherit swords, but cannot inherit staves or lances. The items Leif inherits must be in Ethlyn's inventory at the end of Chapter 3; those items will be unavailable for Chapters 4, 5, and 6. Leif promotes to Master Knight and is one of the strongest units in the second generation; items such as the Paragon Ring or Follow-Up Ring can help him reach that point much faster, but him inheriting them will deprive them from other units in both generations who may also want them. Alternately, Leif can inherit enough valuable items that he can sell for gold in order to purchase the items he wants once other units are finished with them, but this requires that Ethlyn acquire the items herself, and still requires that those items be unavailable for three chapters.

Ethlyn is playable as a SpotPass character, released in the Genealogy of the Holy War first-generation character set.

Like all female bonus units in Awakening, Ethlyn has access to all base class and advanced class skills available to standard female units.

There are two different variations of Ethlyn available to Heroes, both of which are tied to her storyline appearance in Genealogy of the Holy War. The normal variation of Ethlyn is one of the characters added to the game in the Seeping Poison update, and was made available to players in the sixth edition of the Tempest Trials+, "Doorway to Destiny", which initially ran from September 11, 2018 through September 21, 2018. A performance-themed variation of Ethlyn was made available between the period of September 8, 2020 through October 8, 2020 as part of the summoning event surrounding the launch of the To Stay Dreaming update.

Ethlyn: Glimmering Lady is only available at 5★ rarity.

Ethlyn is very level-headed, in contrast to her brother's more reckless ways. During their childhood, she assumed the role of the mother figure of the Chalphy family after their mother's death, taking care of her father and Sigurd; this led to her never really being particularly "lady-like", even after she married Quan and became a princess.[1] Sigurd claims that she was rather harsh and naggy about it, which she retorts was out of necessity from how sloppy Sigurd and Byron were.[8] She is considered something of a role model by the Leonster knight Selphina, and the two used to be rather close.[9]

When recruited, Ethlyn already has full love growth with Quan; should Quan be defeated, he and Ethlyn will both leave the party.

Ethlyn is featured on four cards in Fire Emblem Cipher.