Aversa (Japanese: インバース Inverse) is an antagonist, and later playable character, debuting in Fire Emblem Awakening. She is the subordinate of Gangrel, the king of Plegia, and student of Validar, leader of the Grimleal. She is well-endowed, sensual, and beautiful, allowing her to seduce men and lead them to their ruin, which is her forte.

Aversa is a boss appearing in two chapters: Chapter 22: An Ill Presage and Chapter 25: To Slay a God. Additionally, she appears as a recruitable NPC in Paralogue 22: The Wellspring of Truth. Aversa is the only recruitable character that starts by default as the Dark Flier class. 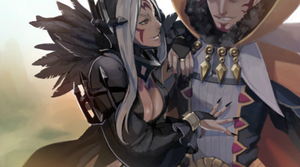 Aversa and Gangrel during the Plegia–Ylisse war.

Aversa served as the subordinate of Gangrel before and during the Plegia–Ylisse war. When Gangrel was in power she conducted inquisitions, searching for Plegian citizens not following the Grimleal faith, and had them punished, ushering in an age of terror with Gangrel in Plegia. She accompanied and aided him in his efforts to spark the war; she was with him when he kidnapped Maribelle, was present for Emmeryn's supposed death, and was also present for Gangrel's fall at the hands of Ylisse's forces. After the war ended Aversa vanished in the two year interim; Chrom and the Ylissean forces appear to have taken no notice of her disappearance, focusing entirely on Gangrel. While it is not confirmed, Aversa may have been the one to convince Gangrel to attempt to acquire the Fire Emblem from Ylisse so the Grimleal could prepare for Grima's ressurection.

During Ylisse's campaign in repelling Valm Aversa resurfaced in Plegia, now openly working under her master Validar. She is briefly present during the meeting with Validar to secure their agreement in aiding Ylisse in defeating Valm. During the war with Valm Aversa covertly offered Excellus the Fire Emblem in exchange for his loyalty; this appears to have been done in preparation for the possibility of Walhart defeating the Ylisseans so Plegia would have a way to defeat Valm from the inside out, though this proved unneeded.

With Valm out of the picture, Validar begins openly pursuing Robin and the Fire Emblem to revive Grima. She first directly fights the Shepherds, accompanied by the Twelve Deadlords, at the Dragon's Table during Chapter 22. She is unsuccessful in capturing Robin and the Shepherds enter the Table and kill Validar, though Grima ends up resurrected anyway.

Aversa makes her final confrontation with the Shepherds during Chapter 25 after they have obtained the blessing of Naga and performed the Awakening. Her last ditch attempt at stopping them from reaching Grima fails and she appears to die in battle.

Despite her apparent earlier death, she appears during Paralogue 22 as a non-hostile NPC only looking for more information on her past; she has arrived at the Wellspring of Truth, fabled to reveal the true self of anyone that gazes into the waters, to learn more about herself. After fighting the reflections produced by the fountain she remembers her past before Validar took her in; as it turns out, Validar was the one that murdered her family due to seeing magical potential within her that he wanted for himself. Her attachment to the Grimleal now shattered, she joins Chrom's forces in a bid to slay Grima.

Additionally, another Aversa from the outrealms appears in Champions of Yore 2 and Champions of Yore 3, being the one responsible for stealing Old Hubba's Einherjar cards with her wiles. Despite her presence as an antagonist here she simply stops appearing and her actions in stealing Hubba's cards end up with no particular resolution.

Aversa appears in Tokyo Mirage Sessions ♯FE as the boss of Chapter 1. She was in control of Ayaha Oribe. However, this control was broken with Tsubasa's song.

Aversa is one of the characters added to the game in the Brave Redux update, and was made available to players in the twenty-fifth Grand Hero Battle, which initially ran from October 25, 2018 through November 3, 2018. Only one variation of Aversa is currently available in Heroes, based on her Awakening incarnation.

Aversa was devout in her service to Validar and the Grimleal, she was mainly used to manipulate the cult's enemies. When she served Gangrel she did not appear to take him particularly seriously, offering him snide comments to compliment his crass attitude, which culminated in her abandoning him before his death.[2] She was willing to lay down her life when fighting the Ylisseans in defense of Validar and Grima.

Her views on the Grimleal turned around completely when she learned that Validar altered her memories to make her an obedient puppet; all loyalty she had to the cult evaporated, leaving her a despondent shell. If she joins the Shepherds she remains distant from the others, except for Robin, who she clashes with. She eventually apologizes to Robin for her secluded and aggressive attitude and agrees to strive towards integrating into the group.

As with the other characters obtained via the SpotPass paralogues, Aversa can only support with Robin, and Morgan, if she marries the male Avatar.

Aversa, Dark One (single ending)
Having reclaimed the truth, Aversa returned to the town of her birth and started life anew as an ordinary girl—as if making up for the time that was stolen from her.

Robin, High Deliverer & Aversa, Dark One
Many wrote of Robin's legendary exploits, but accounts of his origins and character varied. Scholars, poets, and bards agreed on one thing alone—he loved his wife, Aversa, above all else.

Aversa is featured on three cards in Fire Emblem Cipher.