Valbar (Japanese: バルボ Valbo) is a playable character in Fire Emblem Gaiden. He is a knight that seeks revenge on Barth for the death of his family.

Valbar is the first knight recruited on Celica's route. He throws himself into battle against the pirates inhabiting the region after the death of his family and having nothing else to lose.[1] He and his friend Leon hire Kamui to get their revenge. If he survives the battle he joins Celica in gratitude.

Valbar is playable as a SpotPass character, released in the Gaiden character set.

Additionally, Valbar appears as an enemy unit in the DLC chapter Lost Bloodlines 2.

Like all male bonus units in Awakening, Valbar has access to all base class and advanced class skills available to standard male units.

In addition, Valbar can also receive the following as a personal skill:

Valbar reprises his role in the remake.

Valbar is a knight that joins in act 2, he has high bases and growths in HP, strength and defense, but low or mediocre ones in every other area. His 4 movement makes it hard for him to keep up with the pegasus knights and dread fighters in Celica's difficult terrain-filled maps. Unlike magic users, Valbar doesn't have ways to extend his range and will likely see little combat in the later chapters. Despite his great HP, because of his low speed and resistance he can often be one-rounded by witches, needing to be trained up to survive them. Luckily he has the highest fatigue tolerance in the game, at 0.65, making it easier to train him up. However in faster playthroughs Valbar will likely never see combat due to his 4 movement.

With the use of the pitchfork DLC, Valbar can reclass into a more useful class such as mercenary, but without it Valbar will likely be a far larger liability than anything else in every map.

Valbar does have a niche as a defensive unit in Celica's army when he joins, since Celica's squad is on the less durable side overall. However, the difficult terrain in Celica's maps impedes him even more than other units, leaving him unable to fight and be useful. Beyond these maps, other units will have outgrown him and he will no longer have a niche to fill. This puts Valbar in a difficult spot, because he will struggle to contribute the entire time he is in the army. While Valbar can still be used and will never be completely useless, it is difficult to find something to do for him unless the player goes out of their way to make use of him.

Valbar is one of the characters added to the game in the Lethal Swordsman update, and became available for summoning by players on October 21, 2019. Only one variation of Valbar is currently available in Heroes, based on his Echoes: Shadows of Valentia incarnation.

Valbar believes in repaying his debts, and believes in living his life without regrets; he is also headstrong and always tries to help people with no regards of the consequences. Valbar is distraught after his family is killed but finds new purpose in life by traveling with Celica. Valbar cherishes the happy memories of his family and is determined to live a fulfilling life for their sake; his straightforward personality earns him many friends and admirers, including Leon.

On Alm's request, he instructs young soldiers in the ways of war.

Valbar joined the One Kingdom's Brotherhood of Knights at Alm's request, where he worked to train the next generation. Well-loved for his open and honest nature, he spent his years happily surrounded by friends and admirers.

Valbar is featured on four cards in Fire Emblem Cipher. 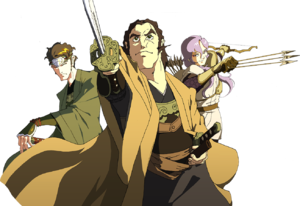 Artwork of Kamui, Valbar, and Leon from the April Fools' website.