Deen (Japanese: ディーン Deen) is a Myrmidon in the employ of Grieth. He does not wish to serve Grieth, but is kept in check by Sonya.[1]

If Celica seeks to rescue Est and defeat Grieth, she must cross the desert. Deen is a high ranking subordinate under Grieth, along with his counterpart Sonya. If Celica chooses to fight Sonya he joins her after Grieth's death.

If Celica chooses to fight him, he perishes in the desert.

Deen is playable as a SpotPass character, released in the Gaiden character set.

Additionally, Deen appears as an enemy unit in the DLC chapter Lost Bloodlines 2.

Like all male bonus units in Awakening, Deen has access to all base class and advanced class skills available to standard male units.

The Valentian Accordion expands on Deen's life before ending up in Grieth's service. He came from a long line of Zofian soldiers, joined the military when he came of age, and got engaged to a feudal lord's daughter. While out on a mission, his fiancée's mansion came under attack. Deen rushed to her aid, but was ambushed and lost the use of his left eye. When he reached the mansion, he discovered his fiancée had been turned into a Witch and used her father's heirloom, the Brave Sword, to kill her.

Deen is a myrmidon that joins at the end of Act 3. He has very solid bases and growths in every area besides luck and resistance. Deen is notably only 5 levels away from being able to promote into a Dread Fighter, making him into a potent combat unit along with other strong Celica party members such as: Palla or Saber. Deen also joins with a Brave Sword (which doesn't actually have a brave effect) which he makes excellent use of, but can be traded to other units as well. Overall, Deen is a solid unit with good combat and access to a powerful class with his only weakness being his somewhat low availability and suceptability to enemy magic users.

In comparison to Sonya

Due to Sonya's worse bases, lower level and being locked to a class with only 4 movement, Deen seems to be the obvious choice. He is, but there are some other factors to consider. Firstly, Deen's map may seem easier because of the unpredictability of witches and Sonya having a 1-2 range weapon with a dangerous critrate. However, because of the high bulk of enemy mercenaries on Deen's map, it's usually easier to complete Sonya's map quickly than Deen's. Another point is how you get Deen's brave sword, but not Sonya's Excalibur. While this is a loss, Excalibur isn't an gamebreaking spell that can turn a weak unit into a combat god. Finally, Sonya is Genny's only support partner and has more story relevance. Genny's support bonuses are largely irrelevant, but if the player wants to experience the full story, it's recommended to choose Sonya. Besides that, Deen is without a doubt the better choice in an optimal playthrough.

Deen was first added to the game in a special desert-themed variation as part of the Of Lost Kingdoms update, and was made available to players in the fiftieth edition of the Tempest Trials+, "To Sing to You", which initially ran from January 18, 2022, through January 28, 2022. The aforementioned desert-themed variation of Deen is the only one currently available in Heroes, and is based on their Echoes: Shadows of Valentia incarnation.

After the war, he unexpectedly disappeared along with the Brave Sword. Rumors say that he crossed over to a continent to the south in search of new conflicts.

Shortly after the war, Deen vanished without a trace, along with the Brave Sword. No record exists of his whereabouts thereafter. 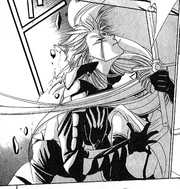 Deen has a similar role to as his in Gaiden, being one of Grieth's underlings and a rival of Sonya.

In the manga Celica challenges Deen. Deen is curious to see the power of a priestess of Mila. However, their battle is interrupted by a jealous Sonya, and later Grieth. Grieth, seeing an opportunity to get rid of two underlings that dislike him, attacks Sonya, though Deen takes the blow and dies for her. Celica kills Grieth, but they are unable to save Deen and he dies from his injuries.

Deen is featured on one card in Fire Emblem Cipher.