Maribelle (Japanese: マリマベル Mariabell) is a Ylissean noblewoman, the daughter of the Duke of Themis,[2] a member of The Shepherds and the best friend of Princess Lissa.

Maribelle is Fire Emblem Awakening's only player unit that starts by default in the troubadour class line. She joins in Chapter 5: The Exalt and the King, quite early in the game's story. Additionally, she is the mother character of Brady.

Maribelle initially briefly appears in Chapter 2: Shepherds. She is at the Shepherds's home base eagerly awaiting on the group's, and Lissa's, return. Lissa introduces her to Robin, the Shepherd's new tactician. During the introduction she is flustered by Vaike's horsing around and then annoyed by Robin's casual acknowledgement of Vaike's antics. Maribelle stays behind as the group leaves to begin negotiations with Ferox.

In the closing events of Chapter 4: Two Falchions, after Chrom's return from Ferox. Phila arrives in Ylisse with a report to Emmeryn and Chrom that Maribelle has been abducted by Plegian forces. Phila also reports that the Plegian incursion has resulted in the attack of a village in Themis near the southwestern border. Gangrel, the king of Plegia, insists that it is Maribelle that initiated the conflict. Emmeryn acknowledges Chrom's desire to kill Gangrel and be done with the warmongering, but she thinks that starting a war simply means Gangrel wins; the group sets off to parley with the king and discuss the matter.

Thus begins Chapter 5; Emmeryn and Chrom arrive in the wilderness of Themis on the border and Emmeryn announces her intent to negotiate with Gangrel. Gangrel claims that Maribelle attacked Plegian troops unprovoked; Maribelle denies this, instead stating she was defending a village in Themis, on the southwestern border of Ylisse, that Plegian soldiers had razed. Gangrel then requests the Fire Emblem in exchange for Maribelle's freedom. Emmeryn asks what Gangrel would want Ylisse's national treasure and he states that he would use it to grant his wish for the destruction of Ylisse; the negotiations then deteriorate into violence. Gangrel also tells Maribelle that she will go down in history for being the one responsible for sparking the war between Plegia and Ylisse.

Maribelle is one of the characters added to the game in the Prince of Ice update, and became available for summoning by players on August 20, 2018. She was featured in the first Forging Bonds event, Defending Ylisse, with Olivia, Libra, and Sumia. Only one variation of Maribelle is currently available in Heroes, based on her Awakening incarnation.

Maribelle: Dire Damsel is only available at 5★ rarity. 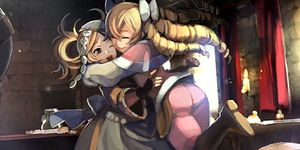 Maribelle considers her status as noble to be of great importance. She often cites her nobility and questions why she should have to justify herself to those lower than her. She does seem to be at least somewhat self-aware of how snobbish she acts but even after realizing it she tends to slip back into her typical demeanor. She also values her own and the appearance of other nobles; often making offhand comments that certain extreme expressions will result in wrinkles and other minor imperfections.

Despite her often rudeness to those of a lower station; she still upholds high moral values equally, even reprimanding Vaike for wagering with Chrom over a simple apple. She also admits to enjoying and appreciating the company of commoners when she loses a bet with Vaike.

Maribelle holds great affection for Lissa. She eagerly declares that she will lay down her life for Lissa, to Lissa's perturbation. Maribelle's attachment to Lissa stems from the fact that Lissa was her only friend in their younger years; Maribelle's attitude did not foster friendships with nobles, much less commoners.

As one might think, she is greatly frustrated by her son's, Brady's, rough appearance and manner of speech. She often attempted to teach him to speak and hold himself like a noble. Despite their disagreements, Brady attempts to learn proper speech in secret to impress his mother; eventually succeeding in speaking like a noble. Maribelle then admits that the high manner of speech does not truly fit him and he is happy that his mother accepts that it isn't for him.

Chrom, Newly Exalted & Maribelle, Dire Damsel
After Grima's defeat, Chrom was officially welcomed as Ylisse's new exalt. Queen Maribelle kept him always on his toes while she strove tirelessly to become a magistrate and reform the halidom's laws.

Robin, High Deliverer & Maribelle, Dire Damsel
Many wrote of Robin's legendary exploits, but accounts of his origins and character varied. Scholars, poets, and bards agreed on one thing alone—he loved his wife, Maribelle, above all else.

Frederick, Cold Lieutenant & Maribelle, Dire Damsel
As Ylisse's new knight captain, Frederick took charge of keeping the peace and training new recruits. His wife, Maribelle, did her own part for Ylisse by studying hard and becoming a respected magistrate.

Virion, Archest Archer & Maribelle, Dire Damsel
Virion returned home to Rosanne, where he was labeled a traitor and a coward, or else ignored entirely. But his wife, Maribelle, treated the people fairly and equally, and in time, they learned to forgive him.

Stahl, Viridian Knight & Maribelle, Dire Damsel
Stahl continued his service as an Ylissean knight and led crucial missions across the realm. Maribelle was quick to whip his scatterbrained nature out of him, and the two lived a long and happy life.

Vaike, Zero to Hero & Maribelle, Dire Damsel
Vaike returned to the streets that raised him and was welcomed as a hero and brother to all. But people were fonder still of Maribelle, who worked tirelessly to win them equal rights in the eyes of the law.

Kellam, Oft Forgotten & Maribelle, Dire Damsel
After returning home to Themis, Maribelle became a magistrate who demanded equal justice for nobles and plebeians alike. Her husband's name has been lost to history.

Lon'qu, Gynophobe & Maribelle, Dire Damsel
Lon'qu returned to Regna Ferox and served as Basilio's right-hand man. Maribelle, for her part, could not stand her new home's nonsensical laws and eventually guided both khans to an era of reform.

Ricken, Upcoming Mage & Maribelle, Dire Damsel
While continuing to study magic, Ricken realized how childish some of his actions had been. Maribelle went on to be a magistrate, and the couple leaned on each other for the rest of their days.

Gaius, Candy Stealer & Maribelle, Dire Damsel
Gaius never lost his sweet tooth, though he ultimately returned to less savory enterprises. Having studied to become a magistrate, Maribelle feared the day she would meet her own husband in court.

Gregor, Swell Sword & Maribelle, Dire Damsel
After the war, Gregor briefly sank into a life of excess, but fear of his wife's verbal abuse led him to resume work as a sellsword. Maribelle's family never approved of Gregor, and he never cared.

Libra, Fetching Friar & Maribelle, Dire Damsel
Many an unfortunate child found joy in the small orphanage Libra and his wife built after the war. Sadly, Maribelle's sharp tongue and proud attitude rubbed off on the tykes, making them quite the handful.

Henry, Twisted Mind & Maribelle, Dire Damsel
Henry settled down with Maribelle and turned out to be a surprisingly good father. Their newborn son inherited his mother's noble blood—but also her sharp tongue, as time would reveal.

Donnel, Village Hero & Maribelle, Dire Damsel
Donnel returned to his tiny village and built a happy life with his mother and Maribelle. Still, he was careful not to pester his new bride about working in the fields, lest she lift a scythe for other reasons.

Maribelle is featured on three cards in Fire Emblem Cipher.