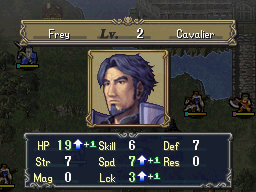 A level (Japanese: レベル level), often abbreviated Lv, LV, or Lv., is a measure of a unit's growth and current relative strength. Levels are directly tied to unit experience, and every time a unit gains a certain amount—typically 100—they level up (Japanese: レベルアップ level up) and gain increased stats.

All units start at a pre-set level, which tend to get progressively higher when units are recruited later and later in the game. Having units gain experience and increase their level is central to their growth and continued use, as every time a unit levels up, they gain stat increases depending on their personal growth rates. Units who are not given opportunities to gain experience and levels will quickly fall behind and be less useful as the game wears on and begins to set the player against progressively stronger enemies.

Just as levels require experience gain, experience gain is also affected by a unit's level. The lower a unit's level, the more experience they will obtain from performing the same action as a higher-leveled unit. The main effect of this is to encourage using weaker units to fight weaker enemies, as they will benefit much more from the experience than their stronger allies. For most units, defeating a boss with a higher level than themselves will usually be enough to gain a full 100 experience and guarantee a level increase.

In most games in the series, reaching Level 10 allows units in base classes to change class, or promote, into advanced classes by using certain items. When a unit promotes, their current level is reset to Level 1, and they are able to continue gaining even more levels and growing even stronger.

Across most of the series, the highest possible level a unit can reach is 20. As soon as a unit reaches Level 20, experience gain completely ceases. For base units, it is possible to continue to gain experience after this point by promoting, effectively giving units forty levels of potential growth. Once an advanced or special unit reaches their maximum level, though, there is usually no way to grow any further.

There are several games in the series which have applied a different approach, either game-wide or specific to certain class types. In later games in particular, it is common for certain types of classes to have a higher maximum level than ordinary human classes, often as compensation for that class's inability to promote.

Fire Emblem Heroes has a maximum level of 40 for all units. Unlike other games in the series, the experience threshold required for a level up increases each time a unit's level increases. In addition to earning experience in battle, a unit's level can also be increased by spending Shards and Crystals on the Level Up menu equivalent to the amount of experience required. A unit's level is reset to 1 when their rarity is increased by unlocking their potential.

Fire Emblem Warriors had a maximum level of 99 for all units on launch, with this later being increased to 110, 130, and finally 150 as of version 1.5.0. In addition to earning experience in battle, a unit's level can be increased by spending gold in the Training Grounds. Levels gained by this method, however, cannot exceed that of the currently highest-leveled unit.