StreetPass (Japanese: すれ違い通信 Passer-by Communication) is a multiplayer networking feature of the Nintendo 3DS console, and the inter-player equivalent of SpotPass. When a 3DS is closed and in sleep mode, StreetPass is active; it detects other 3DS consoles in sleep mode within a radius of approximately 30 metres[1], and certain software titles activated to use StreetPass will exchange some player data between the two consoles; for example, StreetPass Mii Plaza uses StreetPass to swap the Mii characters of 3DS users between consoles, and players can use collected Miis to play minigames. 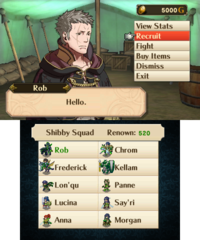 Encountering the "Shibby Squad", a StreetPass team led by an avatar named Rob.

On the world map, the player may approach units received through StreetPass and parley with them: when parleying, the player can do the following:

Once recruited, Avatars obtained through StreetPass function as bonus units.

When assembling a StreetPass team, in addition to preparing the team itself, the player can also set up and modify a profile card accompanying their StreetPass team. These cards are viewed in the Avatar Logbook, if a StreetPass bonus unit is saved there. The card allows seven fields to be defined:

In addition, the card will also display all unit marriages which occurred within the save file.

The following items cannot be purchased from StreetPass teams if the team possesses the item. However, units in the bonus team continue to possess these items when challenged to a skirmish and will wield the weapons as normal.

An Awakening-themed puzzle for the Nintendo 3DS's StreetPass Mii Plaza has been released in Japan and the United States. After the April 2012 Nintendo Direct presentation, Japanese Nintendo 3DS consoles received the puzzle alongside a Mario Tennis Open puzzle; American consoles started receiving it approximately on January 30th, 2013, and European consoles on April 12th, 2013. In both countries, one initial piece is transmitted at random through SpotPass to Nintendo 3DS consoles, and the rest of the puzzle is collected through encountering other Nintendo 3DS owners through StreetPass and taking new pieces from them, or by purchasing new pieces at random through the player's accrued Nintendo 3DS Play Coins. The puzzle consists of 40 pieces, eight of which are special pink pieces which cannot be purchased with Play Coins, and depicts a brief animated loop of Chrom's duel with "Marth" in the Arena Ferox.

Despite 3DS consoles of different languages normally possessing compatibility with Mii Plaza puzzles, the Awakening puzzle was locked to Japanese consoles until January 2013; attempts to view the puzzle in an international 3DS console will inform the player that the puzzle is "not available yet" for non-Japanese players.[2] Presumably, American consoles can now freely exchange pieces of the Awakening puzzle with Japanese consoles, now that the puzzle has been internationally released.