Kill bonus refers to two different bonuses awarded to a unit's weapons and abilities to wield thereof for killing an enemy unit.

In Genealogy of the Holy War 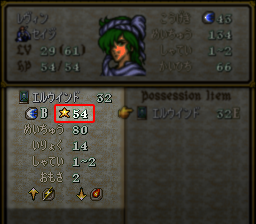 Highlighted: Lewyn's Elwind has been used to kill 54 units, enabling him to perform critical hits and granting a +4 crit bonus.

The Genealogy of the Holy War kill bonus is concerned with boosting a unit's critical hit rate for every enemy killed, operating on a weapon-by-weapon basis. Every time a weapon is used to kill an enemy, it gains a kill bonus point, expressed in the weapon's stat listings as "★n" (for example, a weapon which has successfully killed fourteen enemies would state "★14"). Once a weapon has achieved 50 kills, the Critical skill is attached permanently to the weapon, enabling its wielder to perform critical hits. For every kill above 50 the weapon achieves, the user is awarded +1 to their critical hit rate, for a maximum of +50 critical once the weapon reaches the maximum 100 counted kills.

In the Game Boy Advance trilogy

The other form of kill bonus is present only in The Binding Blade, The Blazing Blade and The Sacred Stones, and is concerned exclusively with weapon experience. Whenever a unit successfully kills an enemy, the amount of weapon experience they would normally earn for using the weapon in question is doubled.