This article is about the stat. For the card from the Nintendo DS games, see Strength (card). For the staff from New Mystery of the Emblem, see Strength Staff. 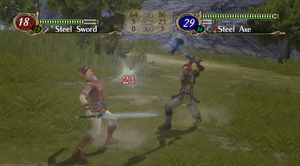 Nolan's strength is very high, to the point that he can kill this Myrmidon in a single hit despite their weapon triangle and terrain advantages.

Strength (Japanese: 力 strength), abbreviated Str, is a statistic applied to units which determines a unit's raw physical muscle. Its most significant use is in determining the damage a unit inflicts when wielding physical weapons, being added to the might of the weapon they currently wield to produce their attack stat. Strength's opposite stat is defense, which reduces the physical damage sustained by units. Depending on the game, strength occasionally has other uses such as in improving attack speed.

Like other stats, a unit's potential prowess in strength is determined by their class, with several classes such as the Fighter and Barbarian being built to have very high strength compared to other classes. Broadly speaking, it is very common for classes which sport high strength to also have high maximum HP and poor-to-mediocre skill, and they also commonly wield axes. On the other hand, numerous other classes, such as Thieves and magic units, are built to lack strength, with a high speed stat being frequently accompanied by mediocre strength at best.

In almost every game, strength is not used for magical attacks, which instead use the magic stat in the same way. The exception is Mystery of the Emblem, which uses strength for magical attacks in the exact same way as physical ones. In Gaiden and the Game Boy Advance trilogy, strength and magic are essentially the same stat, read from the same values, and whether it is considered strength or magic merely depends on the unit's class and displayed weapon levels.

Attack (Japanese: 攻撃 attack), abbreviated Atk (Japanese: ＡＴＣ), is the calculation generated from a unit's current offensive stat and the might of their current weapon, plus any other bonuses they are currently experiencing such as from supports. A unit's attack is the maximum damage they could possibly inflict in one normal attack, and when attacking, the opponent's defensive stat is subtracted from the attack to generate the amount of damage a unit will deal in a normal, non-critical or non-sword skill attack. When a unit is wielding a physical weapon (sword, lance, axe, bow, dagger, gauntlets, or—in Radiant Dawn—staff), their strength stat is used to generate their attack. In games from Genealogy onward, their magic stat is used instead when wielding a tome or magic weapon.

In Fire Emblem Echoes: Shadows of Valentia and Heroes, strength is not shown on the stat screen; instead, attack is what is shown.

In Path of Radiance, Radiant Dawn, Shadow Dragon and Three Houses, strength is also employed in the attack speed formula instead of constitution, as a factor mitigating the effect of a weapon's weight on a unit.

In this formula, if strength is more than the weapon's weight, the attack speed is simply the character's speed stat.

In Thracia 776, strength is halved temporarily when attempting to capture an enemy unit, or when carrying an allied unit. Also, if under the effects of the Sleep or Stone conditions, a character's strength becomes 0.