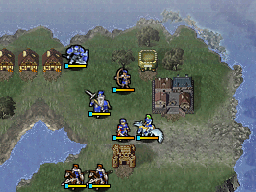 A village in Shadow Dragon.

In the context of gameplay, a village is a type of building present on the map which is threatened by the enemy forces. A side goal for the player is to have their units visit any villages present on the map in order to warn them of the threat, help them lock down and protect against being pillaged by enemy outlaws. Each village visited will reward the player with a free item, gold or even a new playable unit. Villages are distinct from ordinary houses, which also appear on the map, in that houses are not threatened and do not give rewards.

In Fire Emblem: Path of Radiance and Radiant Dawn, owing to the larger scale of these games, ordinary buildings play the same role. Fire Emblem: Thracia 776 does the same and calls its village analogs private houses.

To save a village, all a unit needs to do is move onto the the village's entrance tile and select the visit command. After a short piece from dialogue from an inhabitant of the village, the unit will receive the village's reward and the village's gate will be closed. Once this has been accomplished, the village is safe and neither player units or enemies will be able to enter it again.

In the majority of games, any unit is allowed to visit a village and claim its rewards, with some villages even varying the dialogue presented depending on who visits. In some rare cases, however, certain rewards can only be claimed if specific units do the visiting (for instance, in Chapter 23 of The Binding Blade, Karel will not be recruited from the village unless Fir or Bartre are the ones to visit it). This is different in Shadow Dragon & the Blade of Light, Mystery of the Emblem and their remakes, where Marth is the only character who has the ability to enter villages.

Villages, being map objects which can be stood on, also have terrain properties of their own which vary from game to game. Standing in a village gate will usually give a unit minor avoid and defensive boosts, and with the exception of Genealogy of the Holy War, all other parts of a village cannot be stood on by anybody except flying units (and even they may not be allowed to in certain games). 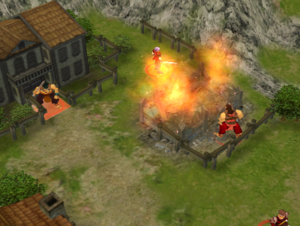 A Bandit destroying a building in Path of Radiance.

In every game except Gaiden and Radiant Dawn, certain enemy classes will seek out any open villages on the map and, if they enter a village, will destroy it and turn it into ruins. Should an enemy do this, the village's reward is completely lost unless the player restarts the chapter or goes back to their last save point. 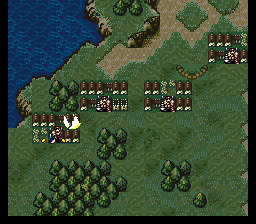 A Brigand destroying a village in Genealogy. This is the third turn that this Brigand has spent on this village, so one segment of the village is already gone.

The villages of Fire Emblem: Genealogy of the Holy War are significantly different from those of other games in the series. Every village gives the same reward in a sum of gold, with a small few villages also giving items or stat boosts in addition to the gold supply. The initial gold reward per village is 5,000 gold, which goes into the unit's personal gold supply rather than a communal gold pot like in other games, but this amount quickly decreases as damage is dealt to the village; the other rewards are not affected by this decrease.

Also, village destruction is much slower. Like most games, villages are spread across six tiles each, but unlike most games, the enemy will destroy only part of the village per turn turn they occupy the village gate. The process of destroying a village completely takes ten turns, and every turn's worth of damage dealt to the village subtracts 500 gold from the sum received when/if a playable unit saves the village. Villages can only be destroyed if the enemy stands on their gate, so a playable unit can theoretically just block the gate and the enemy will be unable to damage the village even if they stand on one of its other parts.

Lists of villages and rewards