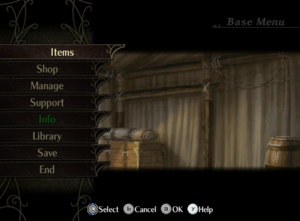 The base system is a pre-battle management system which appears only in Fire Emblem: Path of Radiance and Fire Emblem: Radiant Dawn. In every chapter once it has been unlocked, the player is brought to the base first and can freely take their time there to manage their units' items and support relationships, view conversations to gain new items or recruit new units, and review reference material on their progress so far and on the game's characters. The player can choose to leave the base and move on to the next battle at their leisure once they have done everything they want to do, but they will also be allowed to return to the base from the following preparations menu.

The base allows access to the usual pre-battle inventory management services, allowing units to withdraw and deposit items from the supply convoy (once the merchant caravan joins), drop unneeded items, trade with each other, and use stat-boosters and class change items. In Path of Radiance, the market services are accessed through this menu as well.

Once the merchant caravan is with the player's party, the player will gain access to the caravan's shopping services as well as the supply convoy.

In later parts of Radiant Dawn, when the merchant caravan is not present (as with the Crimean party in Part 2, and Micaiah's party in Part 3), the player's army will take over the market with generic soldiers manning each shop. In Part 4, the merchants will split up with the three different parties: Muston accompanies Micaiah's party, Aimee accompanies Ike's party, and Jorge and Daniel accompany Tibarn's party. Each will assume control of all market services, although the forge is still only available in Tibarn's party. 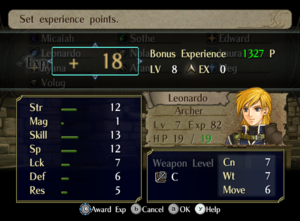 Supports (specifically buddy supports, in the case of Radiant Dawn) are activated in this menu in the base. When playable units have gained enough support points to be able to increase their support rank, the player will be allowed to select them from the support menu to establish or improve their support relationship. In Path of Radiance, the conversation will take place immediately along with the support upgrade, but in Radiant Dawn only the support rank increase will happen and the generic conversations between the pair will occur in battle. 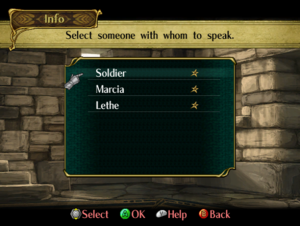 The Info menu, with base conversations available to view.

Radiant Dawn adds the library, which allows the player to view three types of supplementary records: