Takumi wielding a Crescent Bow. The weapon's "brave" effect is demonstrated by the "×4" marker, indicating he will strike four times.

Brave weapon (Japanese: 勇者の武器 Hero's weapon) is a generic term for a relatively rare type of weapon introduced in Fire Emblem: Genealogy of the Holy War and present in all installments since. They are rare weapons famous for granting their wielder the ability to attack more often than usual in a round of combat.

Brave weapons possess a unique and valuable functionality: when used, they allow the user to attack double the number of times they normally would, generally described as "attacking consecutively", "attacking twice" or "attacking twice per turn". At minimum, this ensures that the wielder of a brave weapon attacks twice regardless of attack speed; at best, it allows them to strike the enemy four times in a single round of combat, more than is possible in any other circumstance (skills notwithstanding).

Brave weapons are not without their drawbacks, however. They sometimes have only an middling amount of durability, which, due to its effect, can be drained very quickly if one is not careful. Additionally, weapon experience gained from using a brave weapon ignores the brave effect; if for example the wielder attacked four times using a brave weapon, they only gain weapon experience from it as if the wielder had attacked just the normal non-brave two times. Finally, in games with weight, brave weapons are often heavy, lowering the speed of units with low constitution or strength.

Most games which feature brave weapons have only the core four physical weapon types—the Brave Sword, Brave Lance, Brave Axe and Brave Bow—from which the weapon group gains its colloquial name. New Mystery of the Emblem introduced a set of four "quick weapons", weaker equivalents of the brave weapons which, while less powerful and durable, functioned the same way and were available at a lower weapon level; Thracia 776 did the opposite with its "master weapons", variants available only at higher weapon levels but sporting lower stats in general, save for increased crit (for the Meisterschwert) or range (for the Master Lance and Master Axe), though they were not limited to the one each of the standard brave weapons, nor the personal weapon status of the Brave Lance. Three Houses instead introduces an entirely new weapon class, Gauntlets, all of which function as brave weapons. Comparatively few brave tomes exist in the main series: the only ones are Dire Thunder in Thracia 776, Celica's Gale and Waste in Awakening, and Lightning and Snake Spirit in Fates. Occasionally, a personal weapon acts as a brave weapon, such as Mareeta's Sword in Thracia 776, and Elincia's Amiti in Path of Radiance and Radiant Dawn.

From Fates onwards, the two consecutive strikes only take effect if the user initiates the battle. However, several weapons in Heroes trigger their brave effects on both the user's and enemy's phases as in previous games: 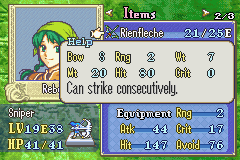 Etymology and other languages (prefix)