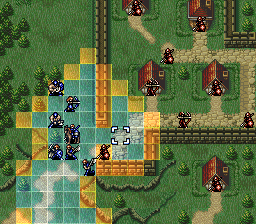 Osian moving across the map; he has 6 movement, and so can move anywhere within a radius of 6 tiles (assuming no terrain obstacles).

Movement (Japanese: 移動 Movement), abbreviated Mov (Move in the GBA games and Radiant Dawn, Mv in Path of Radiance and Three Houses) is a statistic present in all Fire Emblem games that determines how far a unit can travel in a single turn. In the Fire Emblem series, the battlefield is arranged as a grid of square spaces, and so a unit's movement is equivalent to the number of adjacent spaces that unit may move in one turn. Additionally, in combination with weapon range, movement also determines the area in which the unit can attack any enemy units within that turn.

Movement represents the maximum possible per-turn distance, and is subject to numerous determining factors. The first and most obvious is that a player may simply not choose to move the full range and can just move anywhere within the movement area. Additionally, the ability to move around the map is hindered by the terrain, with certain types of spaces costing more than one movement to cross (such as forests or mountains) or completely disallowing being passed at all (walls and empty spaces).

Unlike other unit stats, a unit's movement is mostly static, can be altered only through class changing or items, and is not increased when leveling up. The exception to this rule is Fire Emblem: Thracia 776, in which movement has its own growth rate and thus a chance to increase (albeit a very small one, as every unit has a movement growth rate of 1-5%). Instead, a unit's movement is primarily associated with and dictated by its class, and can otherwise only be manipulated through stat-booster items like the Boots. Units that travel on foot generally have significantly lower movement than units mounted on horses, pegasi, or wyverns. When a unit promotes, their movement generally increases by an interval of 1 or 2. 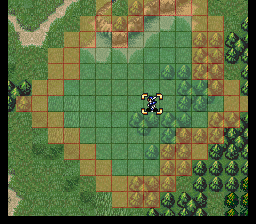 Lewyn's movement range on plains (to the left) and forest terrain (downward), demonstrating the effect of movement cost (see example).

The concept of movement cost or terrain penalty describes the effect had by types of terrain over a unit's movement. The movement cost value, associated directly with the terrain type, determines how many movement points held by a unit are consumed when attempting to cross a space. The standard cost for basic plains terrain is 1 movement point per space, and thus has no tangible penalty. Other terrain types such as forests have a higher movement cost, typically requiring 2 movement per forest space crossed, and thus limit the unit's movement distance should they be moved in that direction.

For example (pictured): Lewyn possesses 6 movement. On normal plains terrain, this allows him to move a maximum of six spaces away from his starting point, at a cost of one movement per plains space (pictured: his movement range to his left). However, were he to cross through two forest spaces, he would only be able to move a maximum of four spaces as each forest space has a cost of two movement per space (pictured: his downward movement range).

Different classes typically have different movement costs depending on the terrain. Typically, horse-mounted units like Cavaliers and Troubadours are penalized more for crossing forests and are incapable of crossing mountains at all, flying units like Pegasus Knights and Wyvern Riders are not hindered at all by terrain penalties, and non-mounted magic units are significantly less affected by the severe movement cost of desert terrain.

Unique to Genealogy of the Holy War is the road terrain, the only terrain which gives an inverted movement "cost": for all non-flying units, the terrain cost for roads is 0.7 movement per tile, boosting their movement by a factor of less than 1.5 while traversing roads. With the assistance of an unbroken stretch of road terrain, a unit's movement can be boosted by between 2 or 3 spaces.