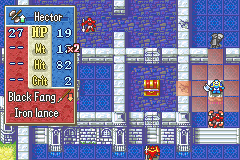 The combat forecast of The Blazing Blade.

The combat forecast (Japanese: 戦闘予測 combat prediction), also known as the combat information window or combat window (Japanese: 戦闘情報ウィンドウ combat information window), is a gameplay feature in the Fire Emblem series, first appearing in Genealogy of the Holy War, although Mystery of the Emblem had a similar feature which displayed the enemy's battle stats.

The combat forecast is shown after selecting attack and then a weapon from the menu or, from Shadow Dragon onward, placing the unit onto an attack-able enemy (which skips weapon selection). The targeted unit can be changed by pressing the left and right directions on the +Control Pad, and combat is initiated with the A button. From Shadow Dragon onward, a unit's weapon can be changed right from the combat forecast menu with the X and Y buttons. Due to this, from New Mystery of the Emblem until Fates, there is an option to skip selection of a weapon entirely: the player can select "Classic" (Japanese: クラシック Classic), which works like previous games, or "Evolved" (Japanese: アドバンス Advanced), which skips weapon selection.

From The Binding Blade onward, by default it instead shows the already calculated damage and whether the unit can make a follow-up attack, rather than showing attack, defense/resistance, and attack speed. Prior to Shadow Dragon, the classic combat forecast menu is able to be chosen in the options menu, or the combat forecast can be turned off entirely.

In Awakening and Fates, a simplified menu is shown if simplified GUI is selected in the options menu, along with simplifying character stat screens. The simplified menu shows what HP values units could have after the combat.

Echoes: Shadows of Valentia returns to showing attack and defense rather than damage, but also incorporates an HP meter similar to the possible result numbers from the simplified menu of older games; it also shows terrain and support bonuses. In the options, a simplified combat forecast can be chosen which is the same as the menu used from The Binding Blade onward, aside from having the HP bar.

Three Houses' combat forecast is similar to Shadows of Valentia's simplified combat forecast. Comparing the information shown, skill icons can be seen, and terrain bonuses are no longer shown; durability is also shown again, as the mechanic returns. ZL and ZR can be used to switch between combat arts. If a Linked Attack is active, the side of the "Hit" label corresponding to the unit glows.