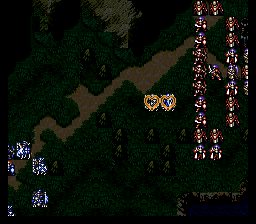 In Fire Emblem: Genealogy of the Holy War, a combination bonus is a statistical bonus awarded to a pair of units who are lovers or siblings. When an eligible pair of units stand next to each other on the battlefield, both gain a +20% chance of executing a critical hit. A combination bonus is the only way for a unit who does not possess the Critical skill, either as their own skill or through their weapon's kill bonus, to execute a critical hit; if they already do possess the skill, the +20% bonus is added to their pre-existing critical hit rate. If a combination bonus critical activates, a brief animation indicating this will play before the battle commences (pictured).

Combination bonuses do not explicitly exist in later Fire Emblem series games, with their function incorporated into the support/bond bonus systems.

The following pairs of characters are siblings and can thus activate combination bonuses:

Though half-siblings as part of the game's story, Seliph and Julia are not counted as siblings for the purpose of the combination bonus.