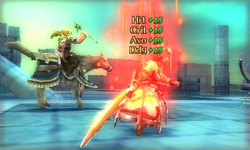 Pair Up (Japanese: ダブル Double) and Dual (Japanese: デュアル Dual) are a pair of closely-related gameplay systems introduced in Fire Emblem Awakening. As related extensions of the support system, these systems award the player's units statistical bonuses and the chance for their allies to assist them in battle. In Fates, the Pair Up and Dual systems got an overhaul. 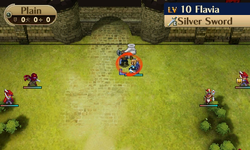 Basilio pairs up with Flavia, acting as her support unit and giving her stat boosts.

The Dual system is the basic layer of these two systems. Whenever a unit in the player's army (the "lead" unit) enters a battle standing next to any ally, the ally will accompany them in the battle sequence and provide the lead unit with three major benefits:

Pair Up serves as an extension of Dual which takes the concept to its logical conclusion and has two units "combine" on the battlefield, in a manner reminiscent of the rescue functionality of earlier games. When paired up, two units act as a single unit on the battlefield, with the lead unit taking the lead while the supporting unit remains safely behind them; the lead unit is granted statistical bonuses based on the supporting unit's current stats and class, in addition to all the other usual effects of Dual. While paired up, the units can also change places between lead and support using the "Switch" option, allowing the player to choose which of the two units to attack with and take attacks that turn. A pair of units will be unable to use any remaining movement after using the "Switch" command, however.

In Fates, the Pair Up/Dual system was changed to make it less powerful, and enemies are now capable of using these.

Tag Team (Japanese: 攻陣 Attack Formation) is an analogue to Awakening's Dual System. When two units are adjacent to one another, if one of those units attacks, the adjacent unit is guaranteed to make a Dual Strike; Dual Guards no longer can take place between adjacent units.

Pair Up (Japanese: 防陣 Defensive Formation) now cannot give Dual Strikes, and Dual Guards are rarer. Dual Guards no longer work with a percent chance; there is a meter that increases whenever the lead unit is hit, and when this meter fills, a Dual Guard is guaranteed.

The skill Shelter of the cavalier class allows a unit to use the "Shelter" command to take another unit as their support unit, making it similar to the Rescue command of Thracia 776 through Radiant Dawn (indeed, Shelter is even called Rescue in the Japanese version).

The Dual Support bonuses are governed by a series of "Dual Support levels" (not to be confused with the actual support ranks). The lead unit's current Dual Support level is calculated by adding up on their current support relationships with their paired-up supporting unit and all adjacent allied units.

The maximum possible Dual Support level a unit can have is 12.

For example: Cherche has an S-rank support with Libra and a B-rank support with Miriel; additionally, Sully (with whom she cannot support) is also on the field. Cherche is paired up with Libra while both Sully and Miriel are positioned next to her. This awards her a Dual Support bonus level of (5 + 3 + 1) = 9, which in battle awards her +20 hit, +15 avoid, +15 crit and +15 dodge. 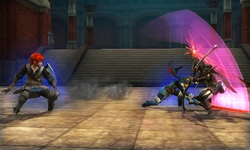 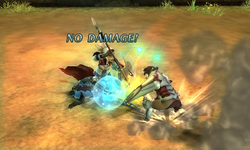 A supporting unit has a chance of executing a Dual Guard against any attacks the enemy makes toward the lead unit, which negates all damage the enemy would deal. The rate of activating a Dual Guard, which is displayed on the combat summary window before beginning a battle, is calculated based on the relevant defensive stat to the weapon type the enemy uses (defense for enemies with physical weapons, resistance for enemies with magical weapons), using both the lead and supporting unit's Def/Res.

When paired up, the lead unit is awarded three cumulative sets of stat bonuses.

The supporting unit gives the lead unit bonuses to all of their stats, except HP and movement, depending on their own current stats:

The supporting unit gives the lead unit a set bonus when paired up which depends on their own current class.

The support level bonuses give further boosts only to those stats given the class bonuses depending on how strong the support relationship between the lead and supporting units is.

This will not award any further bonuses to movement.

Dual Strikes will always occur when two units are standing next to each other, rather than being random like in Awakening. They will only occur, however, if the leading unit is not paired up with anyone. If the attacking unit's partner is paired up with a third unit however, they will still dual strike when the leading unit attacks. Dual Strikes will inflict half the damage of a normal attack, and their hit rates are shown separate from the lead attacker's.

If the opponent is in Pair Up, their partner will always block incoming Dual Strikes.

Instead of being random, a meter consisting of ten shields is present when two units are paired up. Each time an attack is made, the meter fills up by two. When the meter is full, a Dual Guard will occur on the next enemy attack. The meter slowly decreases each turn should the pair not engage in any combat.

When paired up, the lead unit is awarded two cumulative sets of stat bonuses.

The supporting unit gives the lead unit a set bonus when paired up which depends on their own current class.[1][2][3]

The supporting unit gives additional bonuses based on their support level with the lead unit. Each unit has their own set of support-based pair up bonuses.

Support bonuses are cumulative; if the pair has achieved an A support, the leading unit will receive all bonuses up to and including the A support bonus.

The support bonuses given by child units are based on those given by the child's parents, as follows:[4]

Skills affecting the Pair Up, Dual, and Tag Team systems 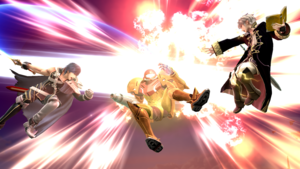 Robin and Chrom perform Pair Up in Super Smash Bros. for Wii U.

Pair Up is Robin's Final Smash in Super Smash Bros. for Nintendo 3DS and Wii U and Super Smash Bros. Ultimate. When activated, Robin summons Chrom and the two join forces to rapidly attack their enemy, finishing by both smiting them with a downward blow at the same time.

As with all Final Smashes, Pair Up is depicted on a trophy in Super Smash Bros. for Wii U.