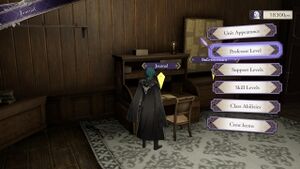 The menu accessed from Byleth's journal in Three Houses.

New Game + (Japanese: クリアデータ引き継ぎ clear data takeover) is a gameplay mode in many video games which allows players to start a new game and carry over some data from a save file that had cleared the game previously. It usually does not alter the story or progression of the game, but it does allow access to many resources earlier than normal, and sometimes offers additional features or challenges. In the Fire Emblem series, it first appeared in the spin-off Tokyo Mirage Sessions ♯FE, then was an option in Fire Emblem: Three Houses and Warriors: Three Hopes. A similar mechanic, in which the player can do a subsequent playthrough with added content using a cleared save file, was also present in Radiant Dawn.

Upon clearing the game, the player will be prompted to save after the credits to create a clear data game file. The game can be cleared in New Game +, and a new clear data game save file can be created, which can be done indefinitely. An in use New Game + save file will be labeled as "Season #", with # indicating the current playthrough. For example, the first time a New Game + is created the file will be labeled as "Season 2"; if beaten and used again it will be "Season 3" and so on. When first loading a clear data file, the player will be taken to the New Game + process and informed of what will carry over to the new playthrough. The data is split into two types: automatic and optional.

Automatic data will automatically carry over into the new game. This includes:

Optional data can be kept or reset when starting a new game. This includes:

The player will be asked for each one if they wish to import or reset it, allowing for some customization. However some skills, namely Ad-libs, Duo Arts, and Special Performances not associated with a Mirage, will be removed regardless and must be relearned throughout the course of the game. If the player is starting a new game on the Lunatic difficulty, this step is skipped and all optional data will automatically reset.

In the Wii U version, one of Tiki's costumes will become available at the Anzu lottery, and the ability to rewatch cutscenes will be unlocked in a New Game +. Both of these features however were moved in the Encore version to be available in the first playthrough.

In the Encore version, after completing Chapter 1, the player is granted the ability to remove Itsuki from the main party. He also obtains a new Perfoma, allowing him to learn the skill Open Audition, to accommodate this.

In all versions, a new "Legendary" difficulty in the Urahara Arena will be unlocked. This difficulty awards the player with War Testament Performa at certain point thresholds, which can be used to create the strongest carnages for each character.

Two new requests are also added in a New Game +. The first is a set of challenges presented by the Grandmaster Mirage located in Illusory Daitama. He will challenge the player to a series of fights carried out by the 6 Assistant Masters, each one located in one of the main Idolaspheres. After defeating each one, the Grandmaster himself will challenge the player. The second can be found by talking to the mirage Nieg in the Urahara Arena. After trading enough Detritus with him, he will show the player his final form, an enhanced version of the final boss known as M-DEUS. This boss is undoubtedly the hardest enemy in the entire game and requires dedicated grinding in order to even compete against him.

It should be noted that some achievements can only be obtained in a New Game +, namely:

A standard new game save file (above) and a New Game + file (below).

When starting a New Game + file, four aspects are carried over from the cleared game: accrued renown, hired battalions and their experience gains, shop inventories, and saint statue levels; play time is also carried over between files, though that has no effect on the gameplay. Additionally, renown can be spent at Byleth's journal in Garreg Mach Monastery to unlock professor levels, Byleth's support levels with other characters, and any character's skill levels and class masteries. Byleth's supports with a character can be purchased at any point after that character is introduced, provided they could normally gain support with Byleth—for example, on the Blue Lions route, Byleth's supports with Edelgard can never be purchased, but their supports with Gilbert can after Chapter 5, even during Chapter 10 when Gilbert is absent from the Monastery; a character's skill levels and class masteries can only be purchased if that character has been recruited.

In addition to content carried over between files, New Game + files have unique access to some exclusive features. Through the Unit Appearance tab in Byleth's journal, every recruited character may be set to their Part I or Part II appearance at any point in the story, and each of the house leaders—Edelgard, Dimitri, and Claude—is granted a hairstyle option, available in their Part II appearances. Crest items are granted to the player based on which route the clear data completed, the rest of which may be purchased from Byleth's journal for 1,000 points of renown each; when in a unit's inventory, a crest item will grant that unit the corresponding crest, allowing them to use Heroes' Relics without any HP penalty, activate the crest's effect at a decreased chance, use the combat art of the correlating Hero's Relic at an increased durability cost, and receive increased healing from the correlating sacred weapons. Additionally, if a Fire Emblem series amiibo is used at the amiibo Gazebo, the Holy Tomb can be accessed to obtain rare items each week. If the player talks to Sothis (or, after Chapter 10, the opposite-gendered Byleth) in the Holy Tomb, they will be granted the Sothis Shield, a team-wide Ward ability that can be used once per battle.

In order to purchase a professor, skill, or support level, it must have been previously unlocked in the file which the New Game + file takes its data—being registered in the Support Log is not sufficient for support levels—and any previous levels must have been unlocked in the current game, though multiple professor and skill levels may be purchased at once, at a cost equal to the cost of purchasing each level individually.

Due to how support points are programmed, it is possible to purchase certain S supports without having unlocked them; if Byleth as a given gender is incapable of unlocking an S support with a particular character, their support points can increase to the threshold where it would unlock—if a pair meets that threshold in a file, that file is used as the basis for a New Game + file, and Byleth is the opposite gender than in the original file, the S support between that pair will be purchasable as if it had been unlocked.[1]