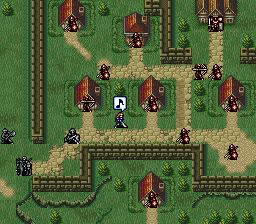 Eyvel's 10% chance of moving again has been activated, as marked by the musical note appearing above her.

Action (Japanese: 行動 Action), widely called movement stars in the English fandom, is a stat exclusive to Fire Emblem: Thracia 776. All units in the game, both playable and enemy, possess between zero and five action stars, which give each unit a small chance to be allowed to have a complete new turn of movement again after completing any action in their turn.

A unit with no action stars, the most common number, has no chance at all of being allowed to move again, while for units with action stars, they have a 5% chance per action star they have, making a 25% chance the maximum possible for the few units possessing five action stars. When the chance to move again activates, a musical note in a blue box appears above the unit in question indicating the activation. Action stars are inherent to the specific unit and cannot be changed at all.