This article is about the gameplay mechanic. For the skill of the same name, see Capture (skill). 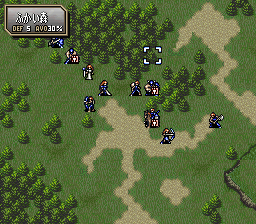 Finn, Marty, and Dagdar are all carrying enemies they have captured, marked by the red icons in the corner of their sprites.

Capture (Japanese: 捕える Capture) is a gameplay mechanic introduced in Fire Emblem: Thracia 776, which acts as an extension of the rescue system introduced in the same game. It allows for units to subdue opposing units smaller than them and take them into their custody. Unlike rescuing, capturing is used equally by both the player and enemies, and enemy units will actively seek to capture units they are able to capture and take them away.

The capture mechanic also briefly appears in a limited form in Fire Emblem: Radiant Dawn, exclusively in the Part II, Prologue: enemy units are capable of capturing Leanne in the same manner, and she will be released from them if the enemy holding her is killed. However, this is exclusive to this chapter and is not available to the player in any form.

This mechanic also returns in Fire Emblem Fates; while it is a similar concept, there are several differences. In Fates capture serves as a way for the player to recruit generic units, the player cannot gain supplies this way. Unlike Thracia 776, the captured unit is not "rescued" and is instead immediately sent to the player's jail at their My Castle. In Fates player units cannot be captured by enemy units; only two player units have the required skill to capture enemy units.

To capture an enemy in Thracia 776, a unit must have a higher constitution stat than their target. If a unit is capable of capturing an adjacent unit, the Capture command will appear on their actions menu, and when selected the unit will attempt to capture the enemy rather than kill it. Units with 20 constitution cannot be captured, as no unit can exceed 20 constitution; mounted units are treated as if they have 20 constitution for this purpose, and thus cannot be captured unless they dismount (which, for enemy units, must be forcibly induced through the Sleep status).

The enemy is successfully captured only if the unit successfully reduces them to 0 HP in the attempt; otherwise, they survive and are not captured. If the intended capture victim does not possess any usable weapons that would grant them the ability to attack at 1- or 2-range, the 0 HP requirement is skipped and the unit is instantly captured. When attempting to capture, all of a unit's stats except luck are temporarily halved, giving them less of a chance to capture them than they would have to kill them.

Captured units are treated in much the same way as a rescued ally: they are marked as a "traveler" for the unit capturing them, holding onto a captured unit temporarily reduces the holder's stats, and they can be exchanged between allies of sufficient constitution on command. Similarly, either the captor or any allied unit next to them is able to trade items with the captive unit, which in practice allows the player to steal items from them and take them for themselves, the primary means of obtaining weapons, items and funds in Thracia 776. A captured unit can be released on command, at which point they will disappear from the battlefield permanently. Captured units are also released if the unit holding them is killed. Units released in this manner are able to act on the turn they are released, unlike rescued units.

Enemy units who have captured an allied unit will not willingly release them under any circumstances, and will instead attempt to escape from the map with them using the nearest enemy escape point on the map. Enemies also will instantly take all non-personal weapons and items from captured player units. Their lowered stats allow the player to have an opportunity to retrieve the captured ally by killing the weakened captor. If a player unit is successfully carried off the map by their captor, they will be considered no longer in the player's party. Simply being held by an enemy at the end of the map will have no effect on this status and the player unit will not be removed from the party (unless the map is an escape map, in which case the reason they are removed from the party is because they did not reach the escape tile). All units who are removed from the player's party in this manner will appear later in Chapter 21x, where they will be found imprisoned (or Chapter 11x if they were captured in Chapter 11).

There are a few chapters where enemies will never attempt to capture player units at all, due to said maps not having any points for the enemy to escape from. Examples of this include Chapter 2x and Endgame.

In Fates, capture is much less limited in what it takes to capture a unit, but more limited in the fact that there are only two characters—Niles and Orochi—that have the required skills to capture: Kidnap and Capture. Both of these skills are personal skills, so they cannot be inherited or learned by any other units.

With the absence of constitution in Fates, Niles and Orochi can capture any unit, provided they are strong enough to defeat them, and the enemy unit is capable of being captured. Very important boss characters like King Garon and Kotaro may not be captured at all due to their importance in the story; minor bosses like Gazak and Haitaka, however, can be captured. Non-humans including Faceless, Stoneborn, Vallite soldiers, Kitsune, Nine-Tails, Wolfskins, and Wolfssegners are uncapturable, with the latter four being the only playable class with inaccessible generic units.

The capture mechanic is disabled in xenologues, meaning players cannot capture enemy units that appear in any of the five xenologue chapters available internationally that are neither scenario chapters (i.e. those that utilize units separate from a player's progress) nor pit players solely against monsters or Vallite soldiers. It is, however, exclusively enabled in Museum Melee, on enemy reinforcements that share their portraits with main story and paralogues bosses. These enemies, once captured, gain the name and the skills that match those of the boss whose portrait they use.

Capturing and recruiting enemy units is the only way the player army can access the normally unplayable Lancer class.

Captured units do not retain their equipment when joining the player army. Captured units do retain all skills when recruited, with the exception of enemy exclusive skills like Dragonskin, and Inevitable End which either disappear or become regular skills. Skills that are unusual for a class, but aren't enemy exclusive will remain, such as an enemy Archer retaining Counter after conversion into the player army.

Units recruited this way have their own personal growths, some dialogue (mainly those shared with other bonus units), and will interact with one another in a few My Castle activities, but do not have the ability to Support nor their own character endings, or records.

then the captor's movement is also reduced by one half.