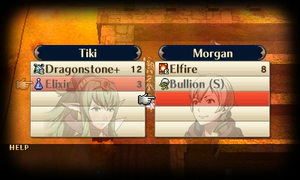 Tiki trading an Elixir into an empty space in Morgan's inventory in Fire Emblem Awakening.

Trade (Japanese: 交換 trade), is a map menu option that exists in nearly every Fire Emblem series game. It allows two adjacent units to give or exchange items and weapons with each-other. Units may also trade with the character they are rescuing or Paired Up with. There are only two games where trading as a function does not exist in its full form.

Fire Emblem: Shadow Dragon & the Blade of Light and Fire Emblem: Genealogy of the Holy War both lack the ability to swap items between units directly. This also makes Fire Emblem Gaiden the first Fire Emblem series game to actually introduce the ability to switch items between two units at once, instead of Shadow Dragon & the Blade of Light's give system, which only allowed units to place items into each-other's empty inventory spaces. This made managing inventory space and items very cumbersome and a waste of turns. 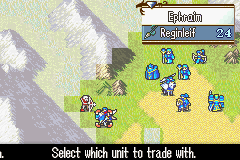 Eirika initiating a trade with Ephraim, whom she has rescued in Fire Emblem: The Sacred Stones.

Shadow Dragon & the Blade of Light only has the "Give" option (labeled "Trade" in the Switch localization), which places an item in an adjacent unit's inventory if they have a free slot, if they do not have a free slot, they cannot accept the item. Genealogy of the Holy War does not allow trading at all, instead, items must be sold to the pawn shop and rebought by the character that needs the item.

The first game to truly feature a item trading feature was Gaiden, this feature has been present in most games since. Trade is also accessible from the Preparations Menu in most games, allowing the player to organize unit inventory without wasting turns in battle. Trading allows the player to access both units' inventory and exchange or give items at will.

The conditions to initiate a trade between two units has a few options. Two units that are adjacent to each-other may initiate a trade, a unit can also trade with a rescued or captured unit in their possession. A unit may also initiate a trade with a rescued unit in the possession of an adjacent unit, except in Path of Radiance. Units together in a Pair Up formation may also trade. Many items can be moved around the inventory at once, as long as the player does not leave the inventory menu.

In certain games, once the player leaves the inventory menu, the active unit's turn is ended. Though in most games the unit may take another action, they are unable to use any remaining movement, unless they have the Canto skill. In Thracia 776 and Three Houses only, a unit can trade repeatedly with multiple adjacent allies, as well as any carried units, an infinite number of times until they take a turn ending action. In every other game with trading, after the first trade is finished, the "Trade" option disappears from the menu and no further trading is possible with that unit's turn without the help of a refreshing unit or simply another unit who elects to trade with them.

The Alondite, locked to the Black Knight's inventory, indicated by a padlock icon in Fire Emblem: Radiant Dawn.

There are a handful of items in the Fire Emblem series that are trade locked, and thus cannot be traded at all. The game that primarily features this is Fire Emblem: Radiant Dawn, where items like Ragnell cannot be removed from Ike's inventory. The Black Knight's Alondite and Elincia's Amiti are also examples of trade-locked weapons. The item having this condition is denoted by a lock icon on the item list. Though in some cases, this lock is removed after certain story events.

Fire Emblem Fates also has a trade lock-system, though it is mostly internally used by monster weapons, and is usually not indicated as such to the player. However, Corrin's early-game personal weapon, Ganglari, is a notable non-monster weapon exception, being locked to Corrin's inventory for a short story duration. The weapons of the amiibo units (Falchion, Ragnell, Thoron, and Parallel Falchion) are also locked to the respective units' inventories.