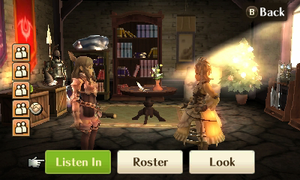 Sumia and Lissa in the Barracks. Five two-person conversation bonuses are waiting to be activated by listening in, including Sumia and Lissa's.

The Barracks (Japanese: みんなの部屋 Everyone's Room) is a gameplay mechanic exclusive to Fire Emblem Awakening, accessed from the world map and first accessible after completing Chapter 4. This mechanic takes advantage of the Nintendo 3DS console's built-in clock and uses it primarily to reward random bonuses to units.

The Barracks themselves consist of a menu with three options: "Listen In", "Roster", and "Look". It can be entered at any time from the world map, provided it is unlocked. Normally, this is just an empty room with decorative items, but if there is a pending bonus event, some characters will be present, walking around or talking to each other.

Every two hours of real time, a new event will be unlocked and added to a queue, up to a maximum of five. Each event's details are picked randomly, and the queue is represented with icons on the left side of the top screen when the Barracks are accessed. Icons can show one person, two persons, or a present. Two-person icons may or may not have an additional icon to their right; this additional icon indicates a support bonus. The characters belonging to the event at the front of the queue (the bottommost icon) will walk in and remain in the room. The events themselves take place each time the "Listen In" option is selected. Most events grant some kind of gameplay bonus.

The player can also look around the room, whether it has people in it or not, using the "Look" option. Upon picking this option, the camera zooms out a bit, and the player is given control. The analog stick controls the camera's angle, R zooms in, and L zooms out.

The Roster option allows players to obtain character profiles. Upon opening the Roster, the player is presented with a list of the current playable characters, ordered and numbered by most recent usage (although Robin is always first). To the left of the list is the highlighted character's full portrait. Pressing A on a highlighted character will update the bottom screen with that character's bio.

Pressing R on this screen sorts the list alphabetically instead, but keeps the "most recently used" numbering system.

While on the main menu of the Barracks, the 3DS's bottom screen will show a playable character saying something to Robin. What they say exactly depends on whether it is:

In most cases, these are just greetings and small talk. During Robin's birthday, the characters will instead wish them a happy birthday, with a pleased expression, as opposed to a neutral one. If Robin is engaged to or a parent of that character, each of these lines will be altered to be more intimate.

Each time the main menu of the barracks is entered, the game picks a character at random. Although normally, characters are picked with a more or less equal chance, there are two exceptions:

An event with a two-person icon will involve a conversation between two randomly-chosen characters. If the two-person icon is not accompanied by another icon, the two characters are incapable of support with each other, and no effect is applied. Otherwise, they will receive a support bonus, boosted by a random amount (although this will do nothing if they are already at maximum support). Exactly which second icon appears depends on certain factors involving the characters:

These conversations usually start with a question or remark from the first question, a reply by the second character, and nothing more, with each character saying just one line. Some parent-children conversations, particularly about the future, will usually have longer responses, though. Each character has a set of generic lines they use for their parts of the conversation, even though some lines of characters with extreme personalities may clash with the usual tone of the conversation. The format of each conversation is picked randomly:

Specific characters may also use unique lines on certain scenarios. For instance, Chrom and Lucina's conversations are unique, and Lon'qu uses more hesitant and distant sentences when talking to a woman.

This type of event can also happen when stepping on event tiles with two paired-up units.

If it is a one-person icon, a single character will walk around the room. They can also receive grant some sort of bonus. What exactly happens to this lonesome character is picked randomly.

In self conversations, a character points out how nothing interesting happened to them. If this happens, the character mentions a specific line, then simply leaves the room without anything else happening.

In these cases, the character announces that they practiced fighting in some way. After their line, they are given a random amount of experience points between 10 and 30. This bonus cannot be used to gain a level—should a unit be chosen for this bonus and be given enough points to otherwise level up, the bonus will instead be truncated to leave them at 99 experience within their current level. The bonus can also be wasted if the chosen character already has 99 experience points within a level, or is already at the maximum level for their class. This event can also happen when stepping on an event tile.

Units might bump into a loose item. On these events, after the character explains how they found something, a random item will be placed into the convoy. The player is notified of what item is obtained, after the character's line. Using a different set of currently-unknown percentage ratios, one of the following items will be randomly obtained when this bonus appears:

With the exception of the Glass weapons (which debuted in the previous game in the series) and the Seed of Trust (which reappeared in the following game), all of these items are unique to Awakening. This same event can also happen when a unit steps on an event tile.

Sometimes, characters will announce how they are feeling particularly well today. In these events, that character is given a temporary +4 bonus to two randomly-chosen stats to be applied in the next chapter or skirmish. These boosts stack with other non-permanent stat boosts; for example, if a character gets Strength and Magic for their surge and has the Strength +2 and Tomefaire skills and a tome equipped, the character's bonuses will be represented as +6 Strength and +9 Magic.

Should a character who had gotten this bonus get this bonus again before going into a chapter or skirmish, the previous bonus will be replaced by the new one; for example, if a unit had previously gotten Defense and Resistance boosts, but gets chosen for this bonus again before entering a chapter and gets a surge in Skill and Luck, the +4 boosts to Defense and Skill will disappear and be replaced by +4 boosts in Skill and Luck.

Each of Awakening's 49 core characters has a birthday. On one of those days, the first time the Barracks are accessed, the corresponding character(s) will be given the first bonus of that day, represented by a one-person icon with a red background and a birthday present icon next to it. This event is forcefully pushed to the front of the queue. They will then be given all three of a surge, a random item, and an experience point boost.

Robin's birthday is set by the player; the other 48 have fixed dates. In the event that Robin shares their birthday with another character, both of them will pop up on the 3DS's bottom screen, and two birthday events will be added to the queue, with Robin's appearing first.

As more characters join the party, the Barracks start to become more decorated. Once a certain character joins the party, a specific decoration will be added to the Barracks. They are as follows: