This article is about the gameplay mechanic. For the spell, see Death (spell). For the Heroes chapter, see Death (chapter). 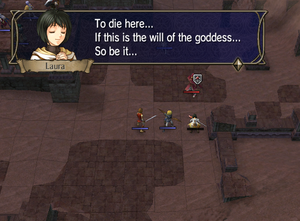 Laura is killed in battle.

Permanent death (Japanese: ロスト loss) is a unique aspect of gameplay in the Fire Emblem series. While other role-playing games may allow the player to revive or otherwise heal fallen party members, Fire Emblem is unique in that any time a unit's HP is reduced to zero, the character completely dies and can no longer fight in-game, requiring the player to restart the chapter if they do not wish to lose the unit. A few games have offered rare and limited ways to revive a deceased unit, and modern Fire Emblem games from New Mystery of the Emblem onward have allowed the conditions of permanent death to be changed as part of selecting the game's difficulty.

The presence of permanent death acts as a way of giving clear consequences to the player's actions, giving a clearer reason to make careful tactical decisions to avoid losing units. Despite being regarded as permanent death, some characters that are either essential to the plot (such as L'Arachel and Innes in The Sacred Stones) or otherwise important to the main character (such as Marcus and Oswin in The Blazing Blade) may stay alive in the game's story and continue to appear in dialogue cutscenes, but for gameplay purposes they are counted as "dead" and can no longer be used in-battle.

The player's units are not the only units affected by permanent death; the same rules apply to enemy armies, which have no way of reviving their lost units, and to the NPC armies who occasionally support the player's forces. However, the deaths of enemies can sometimes also affect the player negatively. Potentially recruitable enemies, such as Ilyana and Tauroneo in Path of Radiance, are affected by permanent death, and having any of these units killed prevents the player from adding them to their army unless they restart the chapter. On rare occasions, the deaths of enemy units even can even impede the player's progress in the rest of the game; for instance, in The Binding Blade, killing Douglas when he appears as an enemy in Chapter 16 not only prevents the player from recruiting him later, but also results in the player being prevented from accessing a sidequest to obtain the Aureola tome, which ultimately prevents the player from accessing the game's true ending.

In all games from Shadow Dragon & the Blade of Light to Radiant Dawn, when a unit dies, their inventory goes with them to their death and is lost forever, and in Genealogy of the Holy War, their personal item storage in the supply convoy becomes inaccessible. Starting with Shadow Dragon, when a unit dies, their inventory is put into the convoy the chapter after.

Merlinus is uniquely "immortal": instead of being undeployable for the rest of the game, Merlinus will return in the next chapter's beginning just as deployable as ever. Deirdre and Julia also have this pseudo-immortality until they leave the army for storyline related reasons. 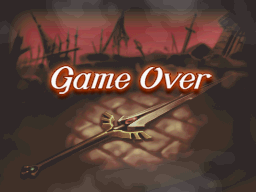 A Game Over in Shadow Dragon.

While the game normally continues if a character is felled in battle, the primary exception is if a protagonist character is killed. If this happens, it is an automatic failure of a chapter and causes a Game Over, as the player is unable to continue without such a character.

The deaths of certain other characters occasionally also trigger a Game Over state. In particular, chapters where the objective is to protect a certain NPC will result in a Game Over if the NPC is killed; examples include Natalie in Chapter 4 of The Blazing Blade and Mansel in Chapter 19 of The Sacred Stones. Other defend chapters require protecting a key point—typically a throne or gate—and preventing enemies from seizing it; should an enemy seize it, this will also cause a Game Over.

In a particularly unusual case, if the player attacks the boss Fargus in Chapter 15xE/16xH of The Blazing Blade, this will result in a Game Over, as the chapter's goal was to talk to Fargus to secure passage to continue the lords' quest. Even if Fargus survives the battle, the attack will anger him into withdrawing his offer of aid, ending the game anyway.

During the game over sequence, some games will usually have another character lament a protagonist's death. A few games will also have differing playable characters do this depending on factors such as who is alive, who is deployed, or story progress. For example, in The Binding Blade, Lilina will mourn Roy's death if she is alive and deployed in battle; if Lilina is not deployed or alive, Guinivere will appear instead in certain chapters, and Marcus will in others if he is alive; if all of other characters are not present, Merlinus will speak.

Even though permanent death has been present in the series from the beginning, ways to avert it have also been present from the beginning. Fire Emblem: Shadow Dragon & the Blade of Light introduced the Aum staff, which can be used to revive a single deceased unit. Later games introduced similar staves, with Fire Emblem: Genealogy of the Holy War featuring Valkyrie and Fates introducing Bifröst.

There are numerous restrictions placed on the use of these staves to counteract their appealing power. Both Aum and Valkyrie have a very limited set of users; Aum is only usable by Elice and Yuliya in the original games (with Maria, Caeda, Minerva, and Sheena being added in the remakes), and Valkyrie is only usable by Claud and his staff-wielding son. In Shadow Dragon & the Blade of Light and Mystery of the Emblem Book I, Aum can only be used at the altar in Chapter 24, and in Shadow Dragon, it cannot be used to revive the character who was sacrificed as a decoy in the game's prologue. Bifröst can only revive the most recent unit who died on the map it is used in, and cannot revive anybody who died before then. All three of these staves can only be used once before they break, and although Valkyrie can be repaired through the weapon repair shops present in Genealogy of the Holy War, doing so is extremely expensive.

Fire Emblem Gaiden and Fire Emblem Echoes: Shadows of Valentia have a similar mechanic with the lion-head statues found in the game's Mila Shrines. The lion heads at three of the game's shrines allow the player to revive characters, with each being able to revive just three characters. Owing to the split paths of Alm and Celica, the player cannot combine the use of these statues. In Gaiden, the lion heads technically allow the player a way to transfer units between the two parties, as a unit that dies in one party can be revived by the other—this is not possible in Shadows of Valentia.

Occasionally, due to plot importance or the structure of the game's story modes, characters may not permanently die if they are defeated.

In Genealogy of the Holy War, Deirdre and Julia will be captured by the enemy if their HP is reduced to zero, rather than being killed, and Sigurd or Seliph will find them at the final castle at the end of the chapter. However, this does not apply to Julia when she is recruited again in the endgame, and her death under these circumstances will be permanent.

Genealogy has a third character who circumvents permanent death: Finn will always reappear in Chapter 7, even if he was defeated during the first generation; he will also retain his inventory (unless he was married), promotion, and stats when he returns. However, should he run out of health in the second generation, he will die permanently. The Blazing Blade, The Sacred Stones, and New Mystery of the Emblem feature similar cases to Finn. In Lyn's story of The Blazing Blade, any characters who have their HP reduced to zero can still return in Eliwood's or Hector's stories, though they will not retain their stats, and will be unusable if they are felled in these stories. In the mandatory sidequest Chapter 5x of The Sacred Stones, Forde and Kyle can be defeated but will still be playable when they return in Chapter 8; Orson also will still appear as the boss of Chapter 16, regardless of what happens to him in Chapter 5x. In New Mystery of the Emblem, any characters that were defeated in the prologue chapters will return in Chapter 1 if they do not leave, or as normal in the chapter they would normally rejoin in if they do; they retain any stat changes in both cases, and retain their inventories in the former.

The four-part structure of Fire Emblem: Radiant Dawn results in a case similar to the above games. Due to the fact that the game takes place over four parts, some characters, both playable and NPC, can be defeated in combat, but still return in later chapters.

In Fire Emblem: Three Houses, three battles in the main story "disable" death upon defeat: the Chapter 1 mission, the Chapter 2 auxiliary battle, and the Chapter 7 mission; each of these battles is a mock battle or exercise between the students and staff of Garreg Mach Monastery. Additionally, battles related to the quests The Best of the Best, Something to Prove, and The Cream of the Crop similarly disable permanent death.

Main series games from Fire Emblem: New Mystery of the Emblem onward feature Casual Mode as an optional part of the difficulty settings of the games. If the game is being played in Casual Mode, units will be removed from the chapter when their HP is reduced to zero, but they will return as playable units in the next with no penalties; the opposite of this is Classic Mode, where traditional Fire Emblem death rules apply as normal. All of the respective games' difficulties can be played in Casual Mode or Classic Mode with no restrictions. In all games except Fates and Three Houses, the defeat of the Lord character still causes a game over in Casual Mode.