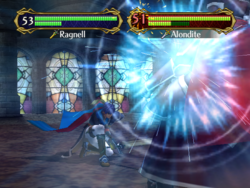 Offensive skills, known as special sword skills (Japanese: とくしゅ剣 special sword) in Genealogy of the Holy War, and colloquially known as trigger skills or proc skills, are a specific type of skill used in combat. By definition, offensive skills are skills which have a percentage chance of activating which is derived from a specific stat possessed by the user, usually their skill stat. When activated, the effect of an offensive skill is to, one way or another, augment its user's next attack with a powerful effect, making the attack significantly more potent. Owing to their raw power and unique effects, offensive skills are typically treated differently from other skills and are often subject to specific rules. The first offensive skills were introduced in Fire Emblem: Genealogy of the Holy War, along with the skill system as a whole.

Offensive skills often involve highly exaggerated actions, such as how Deadeye has Leonardo leap high into the air to shoot his foe.

In a way, the difference between offensive skills and ordinary skills that happen to have similar effects is more style than substance as, for instance, Adept is decidedly not presented in the same way as Astra. One trait shared by offensive skills, and found in few to no other skills, is fanfare and dramatic effect. From their first appearances in Genealogy, the activation of a offensive skill has always been announced by a distinct flash and/or noise, which are much brighter and more attention-grabbing than the more low-key sounds and lights used by other skills. From the Tellius games onward, offensive skill attacks usually have the skill's user move with completely unique animations. In the Tellius games and Radiant Dawn in particular, these traits are taken to their logical conclusion and the skills are presented with significant dramatic fanfare to emphasize them as a big deal, with offensive skill attacks involving long, drawn out animations which make heavy use of exaggerated motions, dramatic camera angles, motion blur, and darkened screens.

In both Genealogy of the Holy War and Thracia 776, there are only three offensive skills in legitimate gameplay, with two more existing as unused content in the former. In Genealogy's skills menu, offensive skills (known as "special sword skills") are specifically labeled as such while the same menu classifies all other skills into the more general "standard skill" and "combat skill" categories.

In the inheritance mechanic of Genealogy of the Holy War, the offensive skills have a unique restriction placed on them: they will only be inherited by child characters who start in a sword-wielding infantry class; this means they can only be inherited by Larcei, Scáthach, Patty, and Lene. This restriction is lifted in Thracia 776, where units of any class are able to learn Sol or Luna by using their respective skill manuals.

In Thracia 776, Sol and Luna will only activate on an attack if that attack will hit the enemy. A unit's hit rate random number is rolled before the offensive skill activation random number, and if the game rolls a missed attack, Sol and Luna will not activate. The exception is if the target has activated Miracle, as Miracle has the potential to force a Sol or Luna attack to miss.[1] Additionally, Astra is not affected by this, and any or all of its strikes can miss the target.

The Blazing Blade and The Sacred Stones

Between the two games, only three offensive skills exist:

All of them are assigned only as class skills, so unlike in prior games, it is not possible for a unit to learn more than one offensive skill.

To activate, rather than having a set percentage based on one of the unit's stats, Silencer instead has a 50% chance of activating if the unit's attack rolls a critical hit. To further elaborate, Silencer checks the Random Number seed as with all attacks: Two random numbers between 0 and 99 (hereafter referred to as RNs) are spent to determine whether the attack hits (Yes if the average of the RNs is less than the unit's hit rate, no otherwise); then, if the attack hits, one more RN is spent to determine if the hit is Critical (Yes if the RN less than the unit's crit rate; no otherwise), and if the hit is critical, one more RN is spent to determine if the critical hit is a Silencer (yes if the unit is an Assassin and the RN is less than 50 [25 against bosses]; no otherwise). Note that this fourth RN is used up for every Critical hit, whether it has any chance of resulting in a Silencer or not.

In The Sacred Stones, the three offensive skills are subjected to a priority system involving the Great Shield skill. This priority dictates what will happen if a unit with one of these skills attacks an enemy with Great Shield:

Therefore, the enemy's Great Shield will not be activated if Silencer or Sure Strike trigger, but will activate against Pierce and prevent it from activating.[2]

In both games, there are restrictions placed on offensive skills based on the unit's equipped weapon and range. In Path of Radiance, offensive skills can trigger at any range for every weapon type except swords, where they will only activate at 1 range. Offensive skills will also never activate on ballistae or long-range tomes.

The following skills are classified as offensive skills in Awakening:

From Awakening onward, it is possible that any offensive skill can activate but still miss the target. The restrictions from Radiant Dawn are mostly lifted, meaning that offensive skills can be triggered regardless of weapon, except for Mire.

As the mechanics of Awakening encourage endless grinding to collect skills, the game system takes into account the possibility that a unit will have multiple offensive skills assigned to it at the same time. Two or more offensive skills cannot activate at the same time as each other, and instead the game prioritizes certain skills over others and will have higher-priority skills activate over lower-priority ones. This hierarchy goes, in order of highest priority to lowest:

As a general rule, the lower the skill's basic activation rate, the higher its priority.

The following skills are classified as offensive skills in Fates:

The same ability to miss and rules of priority from Awakening also apply in Fates, with the priority order being as follows:

Several weapons in Fates are unable to activate offensive skills at all; all of these weapons also cannot inflict critical hits. These weapons are the following: