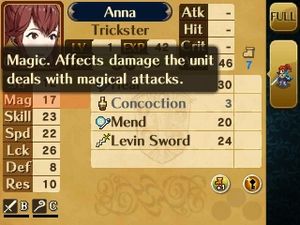 Magic (Japanese: 魔力 Magical power), abbreviated as Mgc in Genealogy of the Holy War and Thracia 776 and as Mag in the English games, is a statistic applied to units which determines the power of a unit's magical attack. The stat was introduced in Gaiden as the magical counterpart to Strength, in that it is used to calculate a unit's total magical damage output. It is also typically used in calculating the total recovery power of healing staves and white magic. In games that feature separate Strength and Magic stats, certain physical weapons, such as the Flame Sword, use the Magic stat in calculating the damage dealt by their ranged attacks.

In Gaiden and the Game Boy Advance games, the strength and magic stats are essentially one and the same, and use the same value. Whether it is labelled as "strength" or "magic" in the unit data window is determined by the unit's class and available weapon types; if one modifies a GBA game to enable Mages to wield swords, for example, the stat will instead be labelled "Strength". In Gaiden, Priestesses and Princesses—who can perform both physical and magical attacks—the stat is always labelled as "Strength" (Japanese: こうげきりょく attack power), regardless of whether the uni is currently using swords or magic, but is used in calculating her magical damage output regardless.

Four games do not feature the magic stat: Shadow Dragon & the Blade of Light, Mystery of the Emblem, Echoes: Shadows of Valentia, and Heroes. In Shadow Dragon & the Blade of Light, magical damage is determined solely by the might of a tome; in Mystery of the Emblem, the strength stat serves the same purpose that magic fulfils in other titles; in Heroes and Echoes: Shadows of Valentia, the roles of the strength and magic stats are amalgamated into a single attack stat which serves a similar purpose to the two source stats in the Gaiden–Game Boy Advance system.

In Thracia 776, magic is also used in calculating a unit's total magical defence, in the absence of the Resistance stat.

In Genealogy of the Holy War, the Game Boy Advance games, Path of Radiance, and Radiant Dawn, magic is used in determining whether or not a staff that inflicts a status effect, such as Sleep or Silence, will have the desired effect on its target.

In Thracia 776, magic is halved temporarily when attempting to capture an enemy unit, or when carrying an allied unit. Also, if under the effects of the Sleep or Stone conditions, a character's magic becomes 0.