A gambit, Assault Troop, being used against an enemy Soldier.

Gambits (Japanese: 計略 Stratagem) are a special kind of action introduced in Fire Emblem: Three Houses. Tied to the use of battalions, they have a variety of uses, ranging from powerful attacks, enhancing the capabilities of multiple units, and various other effects. They have large areas of effect, and can affect multiple units in a single use. To compensate for their power, they have limited uses per battle, and their hit rates can fluctuate significantly, though the latter is tied to the charm stat. 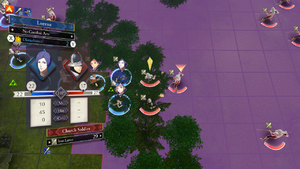 Lorenz preparing to use a gambit against an enemy Soldier. The yellow cursor denotes the primary target of the gambit, while the smaller orange arrows denote other targets that will be affected by the gambit.

All gambits are categorized as one of the following:

supportive actions. Gambits have an area of effect, allowing them to damage, afflict, or aid multiple units at once; these areas extend out from whichever target is chosen. The shape and size of the area of effect can vary significantly, with some being straight lines, some being radial, and some even being triangular. Offensive gambits will only affect enemy units, while support gambits will only affect allied units. All gambits additionally have a set number of uses per battle, which are replenished at the end of each map.

Like weapons, each gambit has its own might, hit, and range stats. The damage dealt by an offensive gambit scales similarly to regular attacks, being boosted by the user's strength or magic, and reduced by the target's defense or resistance. The charm stat additionally improves the power of gambits, though to a much smaller extent. The accuracy of a gambit, on the other hand, is handled much differently from weapon or spell accuracy. For accuracy, charm is the primary factor, with the difference between the user's and the target's deciding how accurate the attack is; if the user's charm is higher than their target's, the gambit will have a higher chance of succeeding. Gambits can never be counter-attacked in any way, though gambits themselves can also never make follow-up attacks or land critical hits.

If a gambit hits its primary target, then all other opponents in the gambit's area of effect will also be affected by it. If a gambit misses its primary target, however, then no units will be affected by it at all. Units that are affected by an offensive gambit will be afflicted with the rattled status, limiting their movement to zero and preventing them from benefiting from battalions, or using a gambit themselves. Most offensive gambits also have a secondary effect, which can range from changing terrain, to moving the affected units' positions, to other various effects. Gambits can only kill their primary target; any other enemies within their area of effect will be left at 1 HP if the attack would kill them otherwise.

If a gambit's area of effect contains multiple spaces occupied by a monster unit, the monster will only take the damage dealt to the main target. The main target's barrier will also be destroyed instantly, while other barriers within the area of effect will be weakened, or destroyed if they have already been weakened by another attack. In addition, using a gambit on a monster will force the monster to target the gambit user instead of whoever they were targeting previously. 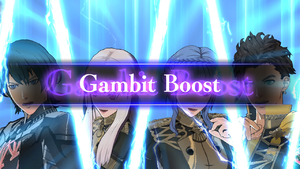 Claude receiving a Gambit Boost from Byleth, Lysithea, and Marianne.

If a unit uses a gambit while also fulfilling the conditions for a Linked Attack—that is, if there are other allied units that can attack the target from their current range—a Gambit Boost will occur. Applied only for offensive gambits, Gambit Boosts increase both the power and hit rate of the used gambit. The potency of this increase is proportional to both how many allies are supporting the unit, as well as the unit's support level with each of them.

Like a Linked Attack, a Gambit Boost will only factor in up to three supporting allies on the field along with an adjutant, for a total of four allies, prioritizing the adjutant and units higher in deployment order if more units could contribute. The maximum Gambit Boost values in a typical playthrough are +16 attack and +80 hit, if three supporting allies are in range, an adjutant is set, and the user has reached an A-rank support with all of them; with New Game +, Byleth can unlock their S supports with multiple units, allowing for a maximum bonus of +20 attack and +100 hit.