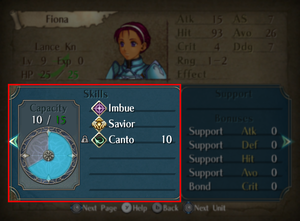 While skills as a defined mechanic first appeared in Fire Emblem: Genealogy of the Holy War, skill-like features of certain classes have existed since Shadow Dragon & the Blade of Light. In Three Houses, skills are instead known as abilities.

Three Houses has the irremovable personal and class skill system from Genealogy and Thracia, but also allows the unit to have a few additional skills as well, which are learned through increasing the unit's skill levels. 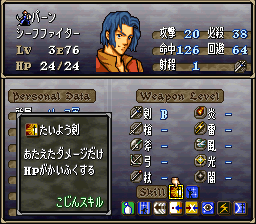 Perne, after learning all eight of the game's manual-taught skills (plus his own base skills), demonstrating an absence of a hard skill maximum in Thracia 776.

In Path of Radiance and Radiant Dawn, skill restriction is determined by the capacity stat. Every unit has a set number of capacity points depending on their class, which are consumed by the skills they have been taught; every skill has a set number of capacity points which it requires to be available if it is to be taught to a unit, with the required point threshold depending on the individual skill. Generally speaking, advanced classes have a higher capacity than basic classes, and laguz possess the highest capacity of any class. It is important to remember that mandatory class skills such as Shove and Canto (marked with the icon

) do consume capacity points and cannot be removed to free up capacity. There is also a physical limit in place in Radiant Dawn, where regardless of how much capacity they have left over, a unit cannot learn more than six skills, including any irremovable ones.

In Awakening, a unit may only have five skills active on themselves at a time; any surplus skills are stored in a pool of skills available to the individual unit, and all units can freely swap around, apply or remove skills in the Equip Skills menu when outside of battle. Fates allows six skills active per unit at a time, a personal skill as well as the five-skill system from Awakening. Three Houses builds upon this further, allowing for one personal skill, five player-assigned skills, and up to three skills inherent to a unit's class.

Technically speaking, class skills exist in almost every game in the series, in the sense of abilities dependent on specific classes, and indeed many abilities available to classes in non-skill-enabled games are considered skills in games with a formal skill system (in some cases, such as Canto and Shove, a skill already existed in an hidden and undefined state in earlier games with skill systems before finally being given a proper skill entry in a later game with a skill system). However, only eight titles in the main series actually possess a formal skill system, and only one skill appears as a defined skill in all eight.

In Genealogy of the Holy War, they are given categories in the skill menu: Standard (Japanese: いっぱん), Combat (Japanese: せんとう), and Special Sword (Japanese: とくしゅ剣). Special sword skills are a specific subcategory of offensive trigger skills which are available only for unmounted sword-wielding units (Myrmidon, Swordmaster, Forrest, Thief, Thief Fighter, Dancer) and cannot be learned by mounted or non-sword-wielding units under any circumstances, and cannot activate simultaneously if multiples are possessed by a single unit. These restrictions were lifted in Thracia 776 onward, allowing them to be freely learned and used by any class. 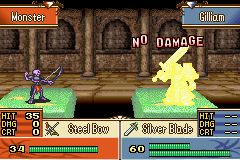