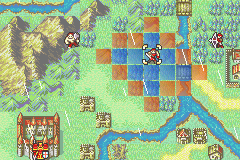 Rain during chapter 10: The Distant Plains in Fire Emblem: The Blazing Blade.

Weather (Japanese: ??? ??) is a general term referring to the weather conditions present during a battle. Aside from Fog of war the more general weather types, like rain and sandstorms, appear in the Fire Emblem series very infrequently.

Fire Emblem: The Binding Blade and Fire Emblem: The Blazing Blade introduced most of the weather types, and many have not been present in a game since those two in a way that effects gameplay. Though, for instance, Fire Emblem Awakening's Chapter 10: Renewal features rain, but it does not hinder units whatsoever, merely being there to set the mood of the chapter.

Fog of war is a weather condition that reduces visibility. Fog of war can be caused by several things, literal fog, darkness at night, and, as mentioned below, sandstorms and snowstorms. 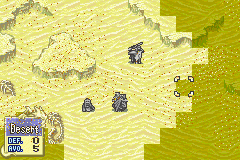 A sandstorm near Arcadia in Elibe. 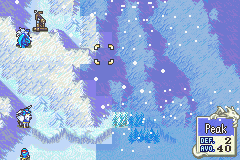 Chapter 19A: Bitter Cold in The Binding Blade. 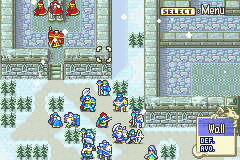 In The Binding Blade, there are two versions of snowstorms. One is a lighter snowfall, while the other is a blizzard, which is featured as a cause of the fog of war in Chapter 19A: Bitter Cold.

In The Blazing Blade it does not come with fog of war, but instead imposes a movement penalty on units that are outdoors. Like rain it can come and go during the duration of the chapter it appears in. A snowstorm occurs in all variants of Chapter 25E/27H. During the chapter Nils will comment on the condition of the weather, he will say if the snow is about to start or end.

Rain during chapter 10: The Distant Plains in Fire Emblem: The Blazing Blade.

Rain is a weather condition that hinders unit movement. It does not hinder units in any other way. Units on horseback receive more severe movement decreases than units on foot. The rain weather condition can stop and return sporadically during a battle. Depending on the chapter either Lyn or Hannah comment on if the rain is going to start or stop soon.

The rain and snowstorm weather conditions function exactly the same in that they both hinder the movement of all units with cavaliers and paladins receiving a more severe penalty. These weather conditions make otherwise ordinary outdoor tiles with no terrain effects or movement penalties cost extra movement. For non-mounted units, the movement cost increases to 2, while for mounted units, the movement cost increases to 3. It should be noted that outdoor tiles that already have a movement cost like forest tiles or mountain tiles do not have their movement penalty increased by rain or snowstorms. Additionally, if the tile is inside a building like in both versions of Chapter 25E/27H, that tile has no movement penalties added to it by the weather.

Chapters with weather conditions by game

The Binding Blade uses weather conditions for aesthetic purposes only. Associated movement penalties are not implemented. 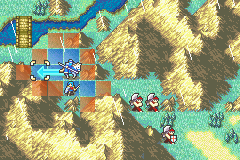