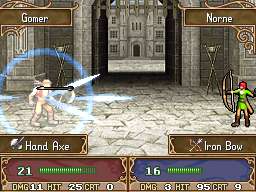 Hit rate or accuracy (Japanese: 命中 hit) is a calculation determining the accuracy of a unit's attacks and their chance of successfully striking and harming their opponent. Hit rate is calculated primarily using the unit's skill stat and their equipped weapon's hit stat, and depending on the individual Fire Emblem series game may include other factors such as their luck stat and bonuses awarded by supports, skills, and the weapon triangle.