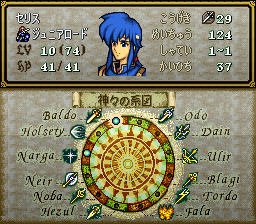 The Holy Blood system is a gameplay mechanic of Fire Emblem: Genealogy of the Holy War and a story element in Genealogy of the Holy War, Thracia 776, Awakening, and Echoes: Shadows of Valentia. It deals with the genealogy of the descendants of the Twelve Crusaders and the ability to inherit their "holy blood", the connection with the dragon gods bestowed upon the Crusaders at the Miracle of Dahna. Possession of holy blood increases the combat abilities of an individual and allows them to wield the holy weapon of their ancestors.

In Fire Emblem Fates, the ability to use Dragon Veins is based on a similar principle. Three Houses also features a similar concept, known as Crests.

In Jugdral, there are thirteen lines of holy blood: the twelve lines of the Crusaders themselves, and that of their enemy Loptous, passed on through the emperors of the Loptrian Empire and linked into the modern day by Saint Maera. The lineages of the Crusaders were preserved through their assembly of various kingdoms and noble houses across Jugdral, while the descendants of Maera secluded themselves into Verdane's Spirit Forest to prevent the Loptous bloodline from influencing the world. Most of the lines are simply named for their Crusader originator, for example "Baldr blood" for the lineage of Baldr; the exceptions are Heim and Ced's lineages, which are instead named for the dragons with whom they made a blood pact, Naga and Forseti. Outside of Jugdral, there exists two further holy blood lineages not associated with Loptous or the Twelve Crusaders: that of the royal family of Ylisse, whose ancestor also made a blood pact with Naga, and that of the Fell Dragon Grima's vessels.

Holy blood manifests in two distinct forms: minor blood and major blood. While both carry power, minor blood carries signficantly less. Possession of major blood grants an individual the ability to wield the holy weapon wielded by their Crusader ancestor, whereas minor blood does not. Generally, even in direct lineage, major blood is significantly rarer and, in groups of children of a given bearer of major blood, will often only manifest in just one of the children, with no criteria as to on which child it will manifest.[1] Major holy blood in children will manifest either if one parent possessed major blood themselves, or if both parents possessed the same type of minor blood; Manfroy of the Loptr Church used the latter to his advantage in the sect's scheme to revive the Loptous lineage, by having two bearers of minor Loptous blood reproduce to produce a child bearing major Loptous blood, able to wield the tome and become a vessel for the dark god.

In the Miracle of Dahna, each Crusader received a holy weapon alongside their blood pact from their respective dragon, each incredibly powerful and boosting the natural abilities of their wielder even further. These twelve weapons all contain a dragonstone from their creator dragon, and are sealed in such a way that only possessors of major holy blood in the matching bloodline are capable of wielding them.[2] Additionally, the connection to the holy bloodlines can enable the weapons to restore lost memories of their wielder; for example, wielding Yewfelle helped restore the memories of Brigid after being raised by the pirates of Orgahil.

By the era of Awakening, however, the sealing of the weapons to the holy bloodlines appears to have faded, as five of the weapons were wielded by the Deadlords and can be subsequently used by any member of Chrom's army of suitable skill. 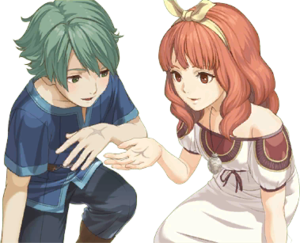 Alm and Celica inspect their brands.

Possession of holy blood manifests physically by the appearance of Brands on the bodies of their possessors, appearing at a varying point in their life and acting as proof of their holy lineage;[3] however, in rare cases the Brand will not appear on a descendant, but will still show up on the descendant's own children.[4] The placement varies based on the individual. It is unclear whether only major holy blood causes Brands to appear or whether they are present on minor holy blood possessors too. The following are all known brand wearers, along with their locations:

As obvious distinguishing traits of holy blood lineage, the people of some countries, like Agustria, have historically taken advantage of this in witch hunts to find and burn bearers of Loptous blood, though generally unsuccessfully and never capturing actual possessors of Loptous blood.[6] Arvis, a possessor of minor Loptous blood, was paranoid about his Loptous heritage being revealed despite also possessing major Fjalar blood, and so made an effort to keep his Brands hidden.

Mechanics in Genealogy of the Holy War

For the second generation, a child unit will, unlike the lore might suggest, inherit all of the holy blood types held by both of their parents. A child will always inherit at least minor holy blood of these blood types; to inherit major holy blood, one of a handful of circumstances will allow them to do so:

With major holy blood, there is some inconsistency in the ability to use their matching holy weapon. For example, Larcei and Scáthach are both Myrmidons, and if Chulainn (who has minor Od just like their mother) is their father, both will inherit major Od blood. However, only their cousin Shannan is allowed to use the matching holy weapon, assuming a glitch to move Balmung into their inventory is not used. Also, even if a character had the needed major blood to wield a holy weapon, they are unable to wield it unless their class is able to use its weapon type.

Substitute units, of course, do not inherit anything as they are static characters who are not the product of playable parent units being paired up. Linda and Amid are the only substitute units to possess any holy blood at all (both have minor Thrud), for story reasons to adequately fulfill their role as substitutes for Tine and Arthur.

The same principle applies for units in possession of major holy blood; however, the growth rate bonuses are doubled for such units.

For example: Larcei, Ayra's daughter, will by default inherit minor Od holy blood from her mother and will gain the +20% HP and +30% Skill growth bonuses. However, if Chulainn (minor Od) is her father, she will instead inherit major Od holy blood, doubling the bonuses given to +40% HP and +60% Skill.

The growth rate bonuses will stack, so units in possession of multiple holy blood types will gain the growth bonuses from both types.

For example: if Larcei's father is Lex, she will inherit minor Nál as well as minor Od, giving her the stacked bonuses of +40% HP, +30% Skill and +30% Defence.

If children obtain new weapon types upon promoting, they will also gain the weapon level boosts afforded by their holy blood. Additionally, should their promoted class increase the weapon level of their current weapon types, their rank boost will added to their new base rank.

For example: Arthur is a Mage and thus would normally have a C rank in fire, wind and thunder magic. Suppose that Chulainn is Arthur's father, thus he possesses minor Thrud and minor Od. As a Mage, he would now have a B rank in thunder magic (base rank C + 1 from minor Thrud) prior to promotion; when promoted to Mage Knight, a class which has base B ranks in swords, thunder, fire and wind, his holy blood increases will boost him to an A rank in swords and thunder instead.