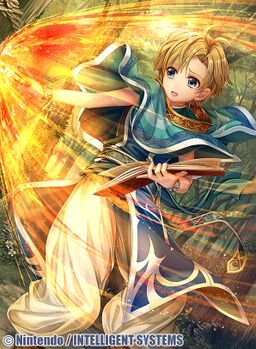 Jubelo casting a fire spell from a tome in Fire Emblem Cipher.

The tome (Japanese: 魔道書 magic book) is a magical weapon type in the Fire Emblem series which debuted in Fire Emblem: Shadow Dragon & the Blade of Light and appears in six games—Shadow Dragon & the Blade of Light, Mystery of the Emblem, Shadow Dragon, New Mystery of the Emblem, Awakening, and Fates. While other games in the series commonly split magic offensive magic into multiple types based on elemental affiliation, the tome weapon type contains all offensive spells in a variety of elemental affilitations under a single weapon type.

In Fire Emblem Fates, the scroll (Japanese: 呪 spell) is the Hoshidan counterpart to the tome. They share the same weapon level as tomes, and can be used just as easily by tome-wielding Nohr units and classes. Compared to their Nohrian counterpart, scrolls are just as powerful yet less accurate, but each scroll gives its own stat boost to the user to compensate. The stat boosts themselves are not uniform among all scrolls unlike the other Hoshidan weapons.

Most of the Hoshido scroll lineup forms a numbered hierarchy featuring animal gods based on the Chinese zodiac. The scroll items themselves are collections of ofuda, talismans in the Shinto tradition, which levitate in a circle when the user is casting a scroll and are held in the shape of fans when inactive.

There are 67 different tomes available in the series.

Tomes are a magical weapon type, so their damage calculations use their wielder's magic stat and target their oppponent's resistance stat, rather than strength and defense. While physical weapons are usually locked to either 1 or 2 range with uncommon exceptions, attacking at both 1 and 2 range is the standard range for tomes. In every appearance except Fates, they are entirely separate from the weapon triangle, but the Fates rearranging of the weapon triangle added tomes to it and had them behave the same way as swords, giving them an advantage over axes/clubs and bows/yumi and a disadvantage to lances/naginata and daggers/shuriken.

In Awakening and Fates, there are some tomes which—while classified as tomes and maintained under the tome weapon level—are considered dark magic and are locked exclusively to the Dark Mage, Sorcerer and units which possess the Shadowgift skill.

In the worlds of the Fire Emblem series, tomes are the standard form taken by the offensive magic used by humans, with the only known exception being the scrolls of Hoshido. In Archanea at least, tomes are vessels which contain the powers of nature itself, and the use of tomes manipulates these energies to the magician's will. The people of Archanea were introduced to tomes by the divine dragon Gotoh, who wished to share the secrets of magic with humans to further their prosperity, but humans started using tomes as tools of war instead.[1]

Tomes in the Fire Emblem series