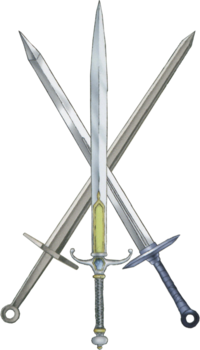 Swords from the Fire Emblem series

The sword (Japanese: 剣 Sword) is one of the primary weapon types in the Fire Emblem series, the most proliferated throughout the series, and the type used by the majority of main characters. A physical weapon type, swords typically possess the greatest accuracy of physical weapons and are considerably lighter, but possess lesser raw power; in this respect, swords are similar to light magic. Along with axes and lances, swords are part of the weapon triangle; in accordance with it, they possess an advantage over axes, but are weak to lances.

106 different swords have existed in the entire series, more than any other weapon type, and on average there are more swords than any other weapon type in an individual game; as such, there is a much greater variety in swords, with a large number sporting rare or unique secondary effect. Swords are almost entirely restricted to only one range, with the variety and quantity of ranged swords generally being limited per game compared to their axe or lance counterparts; almost all ranged swords are magic swords, which cast magic to attack at 2 range.

In Fire Emblem Fates, their Hoshidan counterpart is called the katana (Japanese: 刀 katana). They are almost exactly the same as swords and share a weapon level, differentiated by the effect of that, when they are equipped, they increase the wielder's speed stat by 1 and decrease the wielder's defense and resistance by one.

Swords in the Fire Emblem series by type

Blades (Japanese: 大剣 Greatsword) are a variation on the standard iron, steel and silver swords. Characterised as larger and heavier blades, they possess greater power than their sword counterparts at the expense of greater weight and lower hit. In Radiant Dawn, they received lance and axe counterparts, the Greatlances and Poleaxes.

Unlike the other physical weapon types, which generally have only a single "killer weapon", there are a larger number of swords which possess a high crit, allowing for significantly greater critical hit chance. Traditionally, some of these swords are locked to the exclusive use of the Myrmidon class family.

A number of swords deal bonus damage to enemies.

Magic swords are an uncommon type of sword. Imbued with some form of magic, they mostly work as normal swords when attacking at 1 range, but cast magic attacks at 2 range. In some games, at range they are fuelled by the unit's Magic and target the enemy's Resistance.

Swords constitute the largest number of personal weapons usable exclusively by select units, and of the powerful regalia weapons typically procured toward the game's end.

There are 76 different classes which, at some point in the series, have been able to wield swords.