Not to be confused with the white magic. 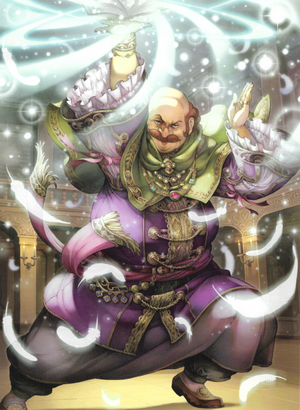 Light magic (Japanese: 光 light) is a weapon type in the Fire Emblem series, first introduced in Fire Emblem: Genealogy of the Holy War as one of the game's five types of offensive magic. The practice of light magic is described in-universe as being derived from religion and the divine, and as a result in most canons the majority of wielders of light magic are of the clergy.[1]

Light magic's statistical balance has varied from game to game. In its first two appearances, its base tome Lightning is more powerful than the Fire, Thunder, and Wind tomes, but there is little variety in the amount of light tomes, with only Lightning, Nosferatu, Aura, and Naga, the latter two of which are not present in Thracia 776. In The Binding Blade, its two standard tomes, Lightning and Divine, are equal in power to their anima equivalents, Fire and Elfire, but they have lower accuracy. From The Blazing Blade onward, light magic statistically has tended toward being medium-weight and more accurate than other forms of magic while possessing lesser raw power, similar to swords.

The place of light magic in the Trinity of Magic depends on the game. In its appearances in Genealogy of the Holy War, Thracia 776 and Path of Radiance, it is separate from the Trinity comprised by the three anima magic types, possessing an advantage over all three in the former two games while being neutral in Path of Radiance. In the Trinity of the Game Boy Advance trilogy and Radiant Dawn, light is at a disadvantage against all types of anima magic, while at an advantage against dark magic.

In Fire Emblem: Shadow Dragon & the Blade of Light, Mystery of the Emblem, Shadow Dragon, New Mystery of the Emblem, and Awakening, there is no separate light magic category, with the broader tome weapon type covering magic which would theoretically be light magic had it existed in a game with the split magic types, such as Aura and Starlight; in Awakening, the sole light tome in the entire game is the Book of Naga, which unlike other tomes does not name a magic type in its description. In Path of Radiance, light magic does not have its own weapon level, and the use of light magic (exclusive to Bishops) requires the Lumina skill which enables the unit's staff weapon level to also act as their light level.