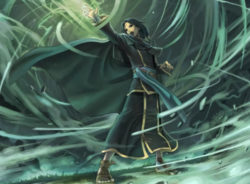 Wind magic (Japanese: 風 wind) is a weapon category and class of magic in the Fire Emblem series, first appearing in Genealogy of the Holy War as one of its five magic types. It is one of the three nature-based magics which comprise the school of anima magic.

The main distinction of wind magic is how the stats of the average wind tome are primarily oriented toward being lightweight and accurate, while possessing lesser power than other schools of magic. In this respect, it can be viewed as a magical counterpart to swords, which tend to be oriented similarly; light magic also gets this treatment in many games. In all appearances following Genealogy, wind magic also possesses an advantage like that of bows where all wind spells are highly effective against flying units such as Pegasus Knights or Wyvern Riders. In accordance with the Trinity of Magic, wind magic has an advantage over thunder and light magic, but is at a disadvantage against fire and dark magic.

Wind tomes can be found in some form in every Fire Emblem game, but wind magic as a distinct, separate weapon category only appears in four games: Genealogy of the Holy War, Thracia 776, Path of Radiance, and Radiant Dawn. In all other games, wind magic is rolled into broader magic categories: black magic in Gaiden, Echoes: Shadows of Valentia, and Three Houses, anima magic in the Game Boy Advance games, and generic tomes in the Archanea games, Awakening, and Fates.

In addition to the effects listed for each, all wind tomes except Wind Tail deal bonus damage to flying units.

There are 24 different classes which have been able to wield wind magic as a distinct weapon type at any point in the series.