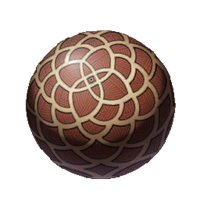 Artwork of a Crest Stone from Warriors: Three Hopes.

The Crest Stone (Japanese: 紋章石 Emblem Stone) is a weapon type which was introduced in Fire Emblem: Three Houses. They are a form of attack used by monster species found in Fódlan, and are their basic methods of attacking.

All Crest Stones have the distinction of having infinite uses, not affected by durability. They almost always have considerable attacking power, as well as ranged capabilities. They do not have a requisite skill level tied to using them. In-universe, Crest Stones are not weapons in and of themselves; instead, they grant their users immense power, allowing them to perform feats such as flinging large boulders, breathing fire, launching blades of wind, and various others depending on the stone and monster involved. Within gameplay however, they are treated similarly to other weapon types, with their additional powers being represented by animations, barriers, and Staggering Blows that are also held by monster units.

22 different Crest Stones have appeared across the Fire Emblem series, all of which originate from Three Houses.

Crest Stones are almost entirely physical weapons which use the user's strength and target the foe's defense stat. The most notable exceptions are the Crest Stones of Indech and Macuil, two of the Four Saints. While most physical weapons and monster attacks are usually locked to 1 range with uncommon exceptions, Crest Stones always possess a range of at least 1–2, with some having even greater ranges. Crest Stones are generally either imbued into their users or ingested by them in some form; as a result, they cannot be unequipped. In-game, Crest Stones are technically considered gauntlets, meaning they are affected by any ability or effect that relates to gauntlets.

In Three Houses, Crest Stones are a major part of Fódlan's history and society. Originally, they were the hearts of dragons that lived in ancient times; being their hearts, they naturally contained much of their power, and allowed them to take on their dragon forms. At some point in history, a bandit named Nemesis would murder the creator of the dragons, Sothis, and take her heart, bones, and blood for himself. Later on, Nemesis would return with many other humans to massacre the other dragons, again taking their hearts, bones, and blood to create Crest Stones, Heroes' Relics, and Crests. Each Crest Stone had its respective Crest carved into it as a marking.[1]

Crest Stones are the main source of power for the legendary Heroes' Relics; without a Crest Stone, a Relic is rendered nearly unusable due to its immense weight. In order to properly harness the power of a Relic's Crest Stone, a relevant Crest is required. If one attempts to wield a Relic without the proper Crest, the Crest Stone's power will take its toll on the wielder, to the point of transforming them into a hideous monster. The monster will also have the Crest Stone embedded into its body somewhere.[2] A human may also be transformed if a Crest Stone's power is harnessed in some other manner, such as by forcefully implanting one within their bodies. These monsters are often draconic in nature, again owing to the Crest Stones being dragon hearts. There is only one Hero's Relic that does not possess a Crest Stone—the Sword of the Creator, which originally held the Crest Stone of Sothis, but it was removed and implanted into Byleth shortly after their birth.

Owing to their great power, Crest Stones are often hidden away by humans in secure locations, to avoid them being misused. Most notably, the Church of Seiros holds many Crest Stones within the Holy Tomb of Garreg Mach Monastery, possibly to give repose to the fallen dragons that once bore them as their hearts. The Kingdom of Faerghus also possesses a secure vault containing Crest Stones; during the events of Three Houses, these are used by Faerghus soldiers as a last resort when they are cornered by the Adrestian Empire.