An ordinary Ballista from Fire Emblem: Genealogy of the Holy War, manned by a Ballistician.

The ballista (Japanese: シューター shooter; plural: ballistae) is a recurring physical weapon type related to bows. It is comprised of siege engines, mostly those of the titular ballista variety. Ballistae are defined by their immense range, with the almost unique benefit of being able to strike at enemy units at up to ten tiles away from the user.

11 different ballistae have existed in the entire Fire Emblem series. In the majority of appearances, ballistae are usually classed as bows which can only be used by specific bow-wielding classes, while the Archanea games make them their own weapon type unusable by conventional bow users. Ballistae are not present at all in Awakening, Fire Emblem Gaiden, or its remake, Fire Emblem Echoes: Shadows of Valentia.

From Mystery of the Emblem onward, all ballistae have a range of 3-10 (except the Iron Ballista, whose range is even greater). This gives them a fearsome presence, but they are governed by several rules which are unique to them and long-range tomes to counterbalance this.

Units who are attacked by a ballista are not able to counter-attack even if they are also equipping a ballista or a long-range tome, which partially protects the ballista's operator from harm. On the other hand ballista users are highly vulnerable to attack if an enemy slips through their range and gets close enough to attack them, as ballistae cannot counter-attack under any circumstances and the user is locked into their ballista with no ability to switch to a different bow (except in The Binding Blade, Path of Radiance, and Radiant Dawn).

The offensive potential of ballistae is undercut by their slow and cumbersome nature, which greatly affects their ability to follow-up attack. Ballistae are entirely incapable of follow-up attacking in all games from Path of Radiance onward, and prior to that, their extremely high weight cripples their users' attack speed and makes double attacks very unlikely. Their very limited durability combined with their scarce availability also prevents depending on them extensively. Outside of the Archanea games, all ballistae available to the player only have a durability of 5, and while their durability is better in the Archanea games, very few are ever received there. 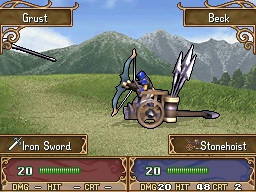 In Shadow Dragon & the Blade of Light, Mystery of the Emblem, Genealogy of the Holy War, Thracia 776, Shadow Dragon, and New Mystery, ballistae work as regular weapons and are carried in their wielder's inventories. Ballistae can only be used by Ballisticians in the Archanea games, while in the Jugdral games, every ballista weapon has a matching, enemy-only Ballistician-like class whose members can only use their matching ballistae. Ballistae are available only to enemies in all of these games except the two Shadow Dragons.

When they first debuted in Shadow Dragon & the Blade of Light, ballistae were not long-ranged weapons and all only had a range of 2. This was changed from Mystery of the Emblem onward. Ballistae are allowed to move in Shadow Dragon & the Blade of Light and Shadow Dragon, albeit with high terrain penalties and low movement stats, but they are completely stationary in the other games. The ballista classes all tend to have very high defense to help with their extreme vulnerability.

All four ballista types in the Jugdral games are effective against flying units, like ordinary bows. This is not the case in Archanea, where ballistae have diverse effects instead. One Archanean ballista, the Arrowspate, is still effective against fliers.

In Elibe, Tellius, Magvel, and Fódlan

In The Binding Blade, The Blazing Blade, The Sacred Stones, Path of Radiance, Radiant Dawn, and Three Houses, ballistae come in the form of objects present on certain maps. These objects can be ridden by Archers, Snipers and Marksmen to access and attack with the ballista. In Three Houses, ballistae instead require a Bow Skill of at least D, while onagers can be used by any non-magic infantry class. In most maps where ballistae are available, they start the map in enemy territory and manned by enemy Archers who will use up some of the ballista's shots before the player's army can reach it.

Ballistae have wheels in The Blazing Blade and The Sacred Stones, which allow their riders to move their ballista around to adjust their range. However, ballistae have low movement and can only be moved on plain terrain, greatly restricting how far a ballista can be moved. Ballistae cannot move at all in The Binding Blade, Path of Radiance, Radiant Dawn, or Three Houses. Path of Radiance and Radiant Dawn also adds a penalty to the range of ballistae: in all other games, a ballista's range extends all around it, but in these two games, ballistae can only be used to attack enemies within that range in front of the ballista.

Every ballista except the Onager is effective against flying units in all of these games, like ordinary bows. In Path of Radiance and Radiant Dawn, ballistae do not take the user's strength stat into account when attacking, meaning that their damage output comes almost entirely just from the ballista's might, similar to the crossbows. 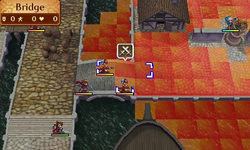 In Fire Emblem Fates, ballistae take the form of turrets (Japanese: 砲台 turret) which, like the GBA and Tellius-era ballistae, are objects which are available on certain maps. They can also be constructed in the player's My Castle for use in the castle defense battles.

Each turret type is matched with a weapon type and can be used by members of any class which wields that weapon type. Unlike past ballistae (aside from the Onager), the turret payloads inflict spread damage across multiple tiles and affect both allies and enemies of the turret user, but in exchange they are unable to kill units and will always leave them with at least 1 HP remaining.[1]

There are three turret types:

In Archanea at least, ballistae need to be lubricated using the oil from a special type of fruit in order to move. This fruit was driven to extinction during the War of Shadows, so while ballistae continued to be used after the war, they became completely unable to move and could only be used from stationary positions.[2]

Ballistae in the Fire Emblem series by type

These five ballistae appear solely in the four Archanea Fire Emblem games: Shadow Dragon & the Blade of Light, Mystery of the Emblem, Shadow Dragon and New Mystery of the Emblem. In these games, the usage of ballistae is exclusive to the Ballistician class. The Archanean ballistae are unique in their diversity of function, each being portrayed and described as firing different forms of ammunition for different roles.

These six ballistae appear in all other ballista appearances in the series. With the exception of the Onager, all of these are variations on the standard "giant arrow" ballista.

There are 10 different classes which, at some point in the series, have been able to wield ballistae.